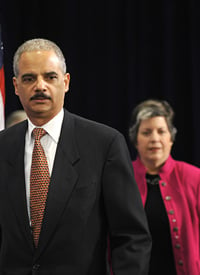 Now that President-elect Barack Obama has formally announced his national security team, two of his appointments have stoked speculation about a course change in a controversial immigration enforcement program.

With Janet Napolitano as secretary of the Department of Homeland Security and Eric Holder as attorney general, Latino advocates hope the new administration will take a look at the federal 287(g) program, which delegates immigration enforcement to state and local authorities and, critics say, has created widespread racial profiling.

"We're hopeful that she'll take a new approach to what we believe to be excessive enforcement tactics," said Elise Shore, Southeast regional counsel for the Mexican American Legal Defense and Education Fund, referring to Napolitano, the Arizona governor.

Shore and another advocate, Kristina Campbell, staff attorney with MALDEF in Los Angeles, were less familiar with Holder's record but pointed to news reports that Holder took a stand against racial profiling while deputy attorney general in the Clinton administration.

"We're all hoping that with this change there will be some scrutiny," Shore said. "It would be great if we could just call in a moratorium [on the program]."

Neither Napolitano nor Holder could be reached for comment. The 287(g) program, named for a section of the Illegal Immigration Reform and Immigrant Responsibility Act, authorizes U.S. Immigration and Customs Enforcement to enter into memoranda of understanding (PDF) with state and local agencies to police immigration laws, typically a federal responsibility.

The idea is that first responders will more likely encounter foreign-born criminals and immigration violators who pose a threat to national security or public safety. The program dates to 1996 but largely went unused until 2006, when the debate over illegal immigration heated up. Now, 63 jurisdictions partner with ICE to initiate deportation proceedings.

According to a fact sheet from ICE, the 287(g) program is not designed to allow state and local agencies to perform random street sweeps: "ICE representatives have repeatedly emphasized that [the program] is designed to identify individuals for potential removal, who pose a threat to public safety, as a result of an arrest and/or conviction for state crimes. It does not impact traffic offenses such as driving without a license unless the offense leads to an arrest." (Emphasis added.)

Thousands have been deported after traffic stops that led to arrests, spurring civil rights complaints.

The current administration's record in investigating the complaints is up in the air. In June, the general counsel of MALDEF wrote Attorney General Michael Mukasey (PDF) requesting an investigation into civil rights violations under section 287(g) in Washington County, Ark., and other parts of the country. A representative from MALDEF said the Justice Department has not responded.

The mayor of Phoenix, Phil Gordon, wrote Mukasey in April (PDF) requesting a civil rights inquiry in the Maricopa County program. In September, an ICE spokesman announced an investigation, but Latino advocates say nothing has happened since.

A spokesman from Gordon's office would not discuss whether the Justice Department is proceeding, citing a request from DOJ that the office not comment. But the spokesman, Scott Phelps, wrote in an e-mail, "Attorney General nominee Eric Holder has a historic and passionate commitment to civil rights. We believe the ball is rolling now, and will only pick up considerable speed beginning January 20."

We were unable to reach anyone at DOJ.

When Holder was deputy attorney general under Janet Reno, he was an outspoken critic of racial profiling policies. Holder said he had been profiled as a college student when New Jersey state police searched his trunk for guns after a traffic stop. In the late 1990s, Holder led the Clinton administration's investigation into racial profiling by the New Jersey state police.

The hopes for Napolitano are based on her five-year record as the governor of Arizona, where observers say she pushed the federal government to take more responsibility for illegal immigration and pursued pragmatic policies divorced from the ideological furor that tends to fuel the immigration debate. Napolitano also cut $1.6 million from Sheriff Arpaio's budget, a decision based in part on Arpaio’s traffic sweeps.

"She cut off his funding," MALDEF attorney Campbell said. "She hasn't blasted him publicly but I think her actions speak pretty well."

Participants in the 287(g) program say it helps get criminals off the streets. "It's working great, as far as I'm concerned," said Donnie Harrison, sheriff in Wake County, N.C., which has worked with ICE since June of this year. The Wake County program gives immigration authority to detention officers, who don't have the power of arrest.

Harrison said an officer can use his or her discretion when determining whether to arrest someone who is driving with an expired tag or operator's license. "So many people who we stop have multiple IDs with different names on each one," he said. "Some don't have any ID. If we think he's lying to us, we would arrest him and bring him in."