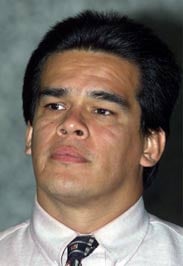 Public fury over the governor’s alleged misconduct has masked the once lively debate over Burris' decision to continue to prosecute the wrong man – despite the objections of one of his top prosecutors – for a high-profile murder case.

While state attorney general in 1992, Burris aggressively sought the death penalty for Rolando Cruz, who twice was convicted of raping and murdering a 10-year-old girl in the Chicago suburb of Naperville. The crime took place in 1983.

But by 1992, another man had confessed to the crime, and Burris’ own assistant attorney general was pleading with Burris to drop the case, then on appeal before the Illinois Supreme Court.

Burris refused. He was running for governor.

"Anybody who understood this case wouldn’t have voted for Burris," Rob Warden, executive director of the Center on Wrongful Convictions, told ProPublica. Indeed, Burris lost that race, and two other attempts to become governor.

Burris’ role in the Cruz case was "indefensible and in defiance of common sense and common decency," Warden said. "There was obvious evidence that [Cruz] was innocent."

Once Burris assigned Kenney to the case in 1991, she became convinced that Cruz was innocent, a victim of what she believed wasprosecutorial misconduct. She sent Burris a memo reporting that the jury convicted Cruz without knowing that Brian Dugan, a repeat sex offender and murderer, had confessed to the crime. Burris never met with Kenney to discuss a new trial for Cruz, Kenney told ProPublica.

"This is something the attorney general should have been concerned about," Kenney, now an assistant public guardian in Cook County, said in an interview. "I knew the prosecutor’s job was not merely to secure conviction but to ensure justice was done."

Kenney was not alone in her beliefs. Prior to Cruz’ 1985 trial, the lead detective in the case resigned in protest over prosecutors' handling of the case, according to news reports at the time.

And rather than argue Burris’ case before the state supreme court, Kenney also stepped down.

"What I took away was that [Burris] wasn’t going to do anything to seem soft on crime," Kenney said. "He didn’t have the guts."

In her resignation letter, Kenney claimed Burris had "seen fit to ignore the evidence in this case."

"I cannot sit idly by as this office continues to pursue the unjust prosecution of Rolando Cruz," she wrote. "I realized that I was being asked to help execute an innocent man."

Burris' response at the time: "It is not for me to place my judgment over a jury, regardless of what I think."  (We have also left a message for Burris at his office and will post an update if we hear back.)

Local prosecutors carried on with the prosecution, even after DNA evidence in 1995 excluded Cruz as the victim's rapist and linked somebody else—sex offender Brian Dugan–to the crime.

Eventually, prosecutors’ case hit a wall. The Illinois Supreme Court reversed Cruz's conviction and granted him a third trial. (The court declared that the trial judge in the case had improperly excluded Dugan’s confession, and thus compromised Cruz's defense.) In the new trial, Cruz was acquitted. The judge in that case concluded, "I'd hope and pray the person or persons - whoever is culpable - is brought to justice."

In late 1995, Cruz finally walked free after serving nearly 11 years on death row for a crime he did not commit.

A grand jury later indicted four sheriff's deputies and three former county prosecutors for their roles in the Cruz case. They were eventually acquitted. Burris was never accused of any wrongdoing or misconduct. Dugan is scheduled to stand trial for the crime next year, 26 years after it was committed.