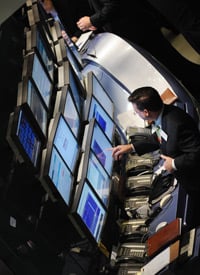 When it comes to diagnosing the root of the current financial crisis, the main culprits have become familiar: mortgage lenders and Wall Street banks. The lenders loosened lending standards and then passed the risk on to Wall Street, where mortgage-backed securities became all the rage. But that narrative ignores an important link in that chain: the major credit rating agencies, particularly Moody's and Standard & Poor's. During the mortgage boom, the agencies gave much of the risky securities their highest credit rating, effectively preserving the illusion that they were risk-proof.

In a two-part investigative series (Part I & Part II), Bloomberg focuses on just how the two agencies got things so wrong. It's an exhaustive examination, involving frank, on-the-record criticisms from a number of former Moody's and S&P supervisors and analysts, and it points to one easy answer: money. Nobody wanted to "kill the golden goose," as one executive put it. Faulty analytical models and inadequate staffing played a role, Bloomberg reports, but these are peripheral compared to the overriding conflict of interest revealed by the pieces.

Moody's and S&P, public companies, get fees from their clients (the banks that packaged the securities) for grading the securities. And starting in 2000, Bloomberg reports, the companies began aggressively shifting their focus from informing investors to drumming up business. The easiest way to do that was to keep the client happy, and nothing made a client happier than a AAA credit rating, the gold standard.

And how to arrive at that AAA rating? As one former S&P senior analyst puts it, "My mandate was to find a way. Find the way."

The pressure was real. Citing former Moody's managers, Bloomberg reports that in 2000 one Moody's executive "visited Wall Street banking customers to pledge a closer, more cooperative relationship and asked whether any of his analysts were particularly difficult to work with."

As a result of finding a way, the two companies were having a very profitable decade before everything began to collapse in 2007. Structured finance products, backed by mortgages or other forms of fixed-income assets, were all the rage. "The rating companies earned as much as three times more for grading complex structured finance products...as they did from corporate bonds," Bloomberg reports. "Through 2007, they had record revenue, profits and share prices...By 2000, structured finance was the companies' leading source of revenue, their financial reports show."

Of course, this couldn't last forever. It's been a steep decline:

[T]he New York-based companies stamped out top ratings on debt pools that included $3.2 trillion of loans to homebuyers with bad credit and undocumented incomes between 2002 and 2007. As subprime borrowers defaulted, the companies have downgraded more than three-quarters of the structured investment pools known as collateralized debt obligations issued in the last two years and rated AAA.

The pieces are full of remarkably candid admissions by some of the former analysts that the ratings were essentially fictional. (An SEC report in July (PDF) on the agencies also revealed some of this: in one e-mail uncovered by regulators, an analyst at an unnamed rating agency complained that her firm's model didn't capture "half" of the deal's risk, but that "'it could be structured by cows and we would rate it.'") The agencies' complex models were simply a way, says S&P managing director Frank Raiter, of avoiding knowledge of the "underlying asset." He was essentially told "to just guess" at the value of these complex securities, to "put anything down," he says. And even if he’d known the right answer, it wouldn't have mattered:

"We knew the delinquencies were bad," he says. "The fact was, if we could have hired a supreme being to tell us exactly what the loss was on a loan, they wouldn't have hired him because the Street wasn't going to pay us extra money to know that."

The analysts apparently hoped that their machinations wouldn't catch up with them. "Let's hope we are all wealthy and retired by the time this house of cards falters," as one analyst wrote in a December 2006 e-mail revealed in the SEC report. The companies have shaken up their leadership and say they've reformed their practices. And of course, the house of cards has collapsed.

ProPublica Is Seeking New Applicants for Our Local Reporting Network