As Bahrain enters the third year of a crisis sparked by Arab Spring protests in 2011, the government continues to bar many human rights advocatesandjournalists from entering the country.

But one non-profit group is not only being welcomed into the tiny Gulf kingdom, it’s opening an office there. And it’s doing so with funding from Bahrain’s ruling monarchy.

The announcement comes at a time when Bahrain’s image-conscious government is still under international scrutiny amid continued pro-democracy protests. Human rights groups have criticized the government’s at times violent crackdown on the protests and failure to follow through on promised reforms.

Institute President Terje Rød-Larsen, a veteran diplomat in the Mideast who is also a United Nations under-secretary-general, told ProPublica that the new office would be a positive force in Bahrain and the region.

He compared the think tank to United Nations programs that operate in or receive funding from countries that are in crisis or face criticism.

“Problems related to peace and security are in difficult countries,” Rød-Larsen said.

Bahrain appeals to the institute as a location for an office because “along many dimensions it’s an open society,” he said, citing the status of women and “freedom of religion.” 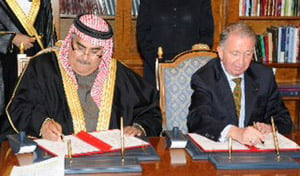 Rød-Larsen said that taking money from Bahrain’s government would not compromise the institute’s work. He declined to say how much money Bahrain is providing.

Rød-Larsen has been a frequent visitor to Bahrain in recent years, regularly meeting with government officials both in his capacity as the institute’s president and as a U.N. official.

With New York offices across from the United Nations, the institute counts many former U.N. officials among its staff and Secretary-General Ban Ki-moon is honorary chair of its board. Rød-Larsen has also traveled with a U.N. staffer on some of his trips to Bahrain, the U.N. news site Inner City Press has noted.

During his visits Rød-Larsen has repeatedly been cited in Bahrain’s state media praising the government, though he disputes the accounts.

“Larsen lauded [the] return of calm to Bahrain which indicates the kingdom’s success in overcoming the crisis,” the official Bahrain News Agency reported in April 2011, just two months after the protests began.

“The U.N. official lauded the climate of freedom, democracy and institutional development in Bahrain,” said another November 2011 report on a meeting between Rød-Larsen and the foreign minister.

Rød-Larsen said that media outlets often attribute inaccurate statements to him on his diplomatic travels.

“If I should dispute all stories like this, it would be full time work,” he said.

Rød-Larsen said that, in reality, he believes Bahrain’s government has made mistakes.

As for what the International Peace Institute’s new office in Bahrain will do when it opens, Rød-Larsen on a recent trip discussed “plans for a renewed national dialogue in Bahrain,” according to the institute.

Khalil Almarzooq, a spokesman for the main opposition group al-Wefaq, told ProPublica that the group had not heard from Rød-Larsen anytime recently. Almarzooq said whether the institute will be a positive force in Bahrain all depends on how it uses the money the government is providing.

Organized as a nonprofit charity in New York, the institute had a budget of nearly $11 million in 2011 and Rød-Larsen received about $495,000 in compensation.

According to the group’s 2011 annual report, its major donors that year included the United States, several governments in Europe, as well as Bahraini regional allies Qatar and the United Arab Emirates. The institute’s international advisory council includes Prince Turki Al-Faisal, the former head of Saudi intelligence. Saudi Arabia sent troops to help put down the protests in Bahrain in 2011.

Bahrain’s Ministry of Foreign Affairs did not respond to requests for comment.