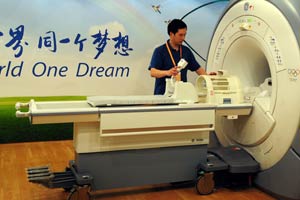 The 58-page opinion by District Judge Dan Polster in Cleveland comes as the first cases head for possible trials and represents a setback for GE by making it easier for plaintiffs to present their positions and harder for the company to make its case before a jury.

Polster criticized GE Healthcare’s lawyers and witnesses for relying on misleading and flawed presentations as they sought to quash the plaintiffs’ theories, including one that Omniscan breaks down chemically, releasing a toxic metal that triggers the disease.

Omniscan has been linked to a rare but often crippling disease, called nephrogenic systemic fibrosis, or NSF, in patients with kidney problems. Lawyers for NSF victims claim the company failed to adequately warn doctors and patients about the dangers.

GE Healthcare, in denying the claims, says the causes of NSF remain unproven. The company maintains that Omniscan is safe and that when reports of NSF emerged it properly revised the label to reflect the small risks posed for some patients.

Polster is managing more than 500 cases filed in multiple states alleging that NSF was caused by imaging drugs from several manufacturers. Omniscan is named in about 400.

The judge’s ruling, made public late Tuesday, is procedural and sets parameters on expert testimony each side may present at upcoming trials. While restricting some important parts of GE’s case, he allowed most of the plaintiffs’ experts to testify.

Jeffrey DeMarrais, the spokesman for GE Healthcare, said in an e-mail the company sought to "exclude speculative testimony" by plaintiffs’ witnesses. The upshot of the order, DeMarrais said, is that "both sides now must present their theories in court."

DeMarrais noted, as did Polster in his ruling, that tens of millions of patients have safely been injected with Omniscan and contrast agents to help make MRI scans easier to read.

The first trial, involving Omniscan, had been scheduled to start later this month, but the judge said he was told the day before his order that the case had been settled. The terms were not disclosed. The next Omniscan trial is slated for later this year.

A central question in the litigation is whether the metal gadolinium, a key ingredient in Omniscan and other similar contrast agents, is the culprit behind NSF.

"Gadolinium, in its free state, is highly toxic to humans," Polster wrote. All the contrast agents are chemically constructed to render gadolinium inert by creating a protective shield. But, the judge noted, "many studies show that Omniscan is more prone" to have the gadolinium break away, making it available to bond with human tissue and blood.

GE Healthcare sought to block any presentation of the theory that this "free gadolinium" causes NSF, but Polster said testimony about the theory was admissible. The company can challenge the theory at trial.

An alternative theory, presented by GE Healthcare and used to discredit the "free gadolinium" theory, is that gadolinium in its protected state may well trigger NSF. This argument spreads the blame among all contrast agent manufacturers, but Polster wrote that the theory "does not explain why the incidence of NSF in patients administered Omniscan far exceeds the number indicated" by the drug’s market share.

Polster also said GE Healthcare did not "advance any explanation why there are virtually no documented NSF cases attributed" to patients administered a competing gadolinium-based drug "which has a different chemical configuration than Omniscan."

The judge allowed the company’s in-house expert to present his theory at trial, noting that all parties agree "the exact mechanism for NSF causation is uncertain." But Polster said he would not permit GE Healthcare’s in-house expert to testify that NSF has occurred in the absence of exposure to gadolinium-based agents because the two studies that served as the basis for that opinion are "fundamentally flawed."

GE Healthcare unsuccessfully tried to block the testimony of two medical school professors that the company failed to properly warn radiologists about Omniscan. In allowing the testimony, Polster criticized the company’s lawyers for objecting to one of the doctors based on "out-of-context statements" and other "flawed" arguments.

Polster also weighed in on another key argument in GE’s defense: that the company complied with all U.S. Food and Drug Administration requirements after reports of NSF emerged, including introduction of a "black box" warning about NSF risks on its label.

The FDA approved the labeling change in 2007 for all gadolinium-based imaging drugs despite findings by agency medical reviewers that Omniscan was the riskiest for NSF.

GE’s lawyers sought to introduce testimony by a former FDA official that the agency would have stopped the company from unilaterally changing its label. But Polster rejected it, saying the proposed testimony "is at best misleading and at worst directly contrary to the Supreme Court’s holdings."

In support, Polster cited a case in which the court rejected an argument by Wyeth, now part of Pfizer, that it could not have modified a warning label already approved by the FDA. The court said "it has remained a central premise of drug regulation that the manufacturer bears responsibility for the content of its label at all times."