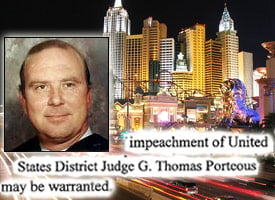 As Hurricane Ike barreled down on south Texas and revelations came to light about sex, cocaine and insider deals at the Department of the Interior, the presiding judge of the 5th U.S. Circuit Court of Appeals posted a raft (PDF) of documents accusing one federal judge of gambling, bribery and judicial misconduct.

The reports ask the House Judiciary Committee to hold an impeachment hearing of Porteous. If the case is taken up, it would mark the first time a federal judge has faced impeachment in nearly two decades. The committee plans to vote Wednesday on whether to create a task force to recommend whether to proceed with impeachment.

The reports allege the judge was an alcoholic and "reckless gambler" who accepted money -- and at times demanded it -- from five attorneys and representatives of two companies with more than 25 cases before him.

New Orleans attorney Jacob Amato told investigators he and his law partner paid Porteous an estimated $10,000, according to the DOJ report. Amato chipped in $2,000 toward the wedding for one of Porteous' children while he awaited the judge's decision on a $110 million civil case. The decision came down in Amato's client's favor but was later overturned.

As Porteous accepted cash, plane tickets and hunting trips from 1998 to 2000, he failed to report the vast majority in financial disclosures, the DOJ and 5th Circuit reports show. In the case that Amato won, the opposing attorney, Joseph Mole, had even asked for a new judge, noting the coziness between Porteous and Amato. That plea was rejected though, by Porteous himself.

Mole said Tuesday he had no evidence of wrongdoing, but only hearsay from the legal community. "I pushed it on to him," Mole said. "He knows obviously what the situation is. I did tell him -- if thereâs something in there we should know about , itâs on you to disclose."

In his own filings in the proceedings, Porteous claims that the gifts were tokens of goodwill from dear friends. "No gift was given as a lawyer to a judge," he wrote in a December 2007 memorandum to 5th Circuit investigators. Porteous also cited the death of his wife, the loss of his home in Hurricane Katrina and coming to grips with drinking and gambling addictions.

"I am only beginning to understand my situation after almost two years of therapy," he wrote in the memo.

The case poses the question: Who was watching the bench?

"Other judges and attorneys have a responsibility, when they see a judge doing something wrong, to do something about it, and you kind of wonder why no one did," said Cynthia Gray, executive director of Center for Judicial Ethics at the American Judicature Society in Chicago.

But Porteous was being watched, it turns out.

The Justice Department report indicates that agents suspected Porteous' misconduct as a state judge before his appointment to the federal bench in 1994. For "several years," the department investigated Porteous and brought evidence to a grand jury of wire fraud, criminal contempt of court and submitting false statements to banks, the report says. According to the 5th Circuit special committee's report, about $80,000 in unaccounted for cash flowed into Porteous' bank and money market accounts from 1998 to 2000.

Porteous' attorney negotiated with the Department of Justice, which decided last year to file a misconduct complaint instead of seeking a criminal indictment, the 5th Circuit report says.

Mole, the attorney who had opposed Amato in the $110 million Liljeberg case, had suspected improprieties as his case reached a conclusion, the DOJ report says. But after his attempt to try the case before a different judge was shot down, he opted to "level the playing field" in a "broken system," he told investigators.

As Porteous closing arguments loomed in the case, Mole added another New Orleans attorney to his team -- one who had no federal litigation experience but who had given the judge an estimated $3,000 in gambling money and meals.

Amato could not be reached for comment. The New Orleans Times-Picayune reported last week that Porteous' docket had been effectively stripped as of June but that he continued to collect a $169,300 salary.

The last federal judge to be impeached was Walter L. Nixon of the District Court for the Southern District of Mississippi. He faced perjury charges and was convicted by the U.S. Senate and removed from office in November 1989.