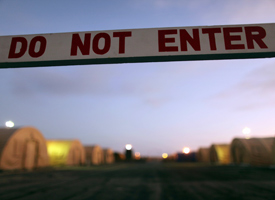 Today's decision by a military judge in one case at Guantanamo Bay -- rejecting the Obama administration's move to freeze all war crimes trials -- will likely force the government to drop charges against the defendant, Abd al Rahim al-Nashiri. The other war crimes cases at Gitmo have been suspended, following President Obama's request for a 120-day halt to the proceedings so his administration can review the cases.

Nashiri was one of three prisoners known to be subjected to waterboarding. His arraignment was scheduled for Feb. 9. But as the Washington Postreported earlier today, Judge James Pohl, an Army colonel, wrote that "the public interest in a speedy trial will be harmed by the delay in the arraignment."

Likely the only way for the Pentagon to now comply with the judge's decision as well as the president's directives is to drop the charges against Nashiri.

"Trust me there will be no proceedings continuing down at Gitmo with military commissions," Pentagon spokesman Geoff Morrell told the Post.

Military prosecutors could eventually reinstate charges once the Obama administration has settled on procedures for future trials, possibly in federal court. Obama signed an executive order last week aiming to shutter Guantanamo within a year.

What makes Nashiri's case unique is the fact that he allegedly confessed, after being waterboarded, to involvement in the October 2000 attack on the USS Cole warship, which killed 17 sailors and injured 50 others. Nashiri has been in custody since 2002, first at the hands of the CIA and then later by the military at Guantanamo.

The CIA videotaped Nashiri's interrogation -- and then destroyed those tapes in 2005. (The DOJ began a criminal investigation last year into the destruction.)

In addition to Nashiri, the CIA used waterboarding -- which involves near-drowning a prisoner -- on Khalid Sheikh Mohammed, accused of organizing the Sept. 11, 2001 terrorist attacks, and on Abu Zubayda, who was allegedly a top deputy to Osama bin Laden in the late 1990s. Zubayda and Mohammed are both at Guantanamo, but Zubayda has not been charged with anything.

“This Was Not a Surprise”: How the Pro-Choice Movement Lost the Battle for Roe