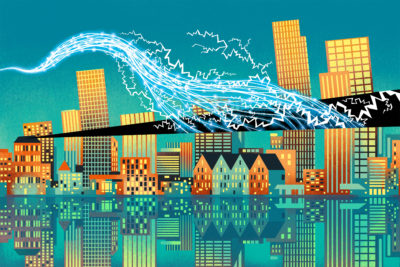 Kentucky’s ambitious plan to improve high-speed internet access across the state is years behind schedule and more than $100 million over budget. Naturally, taxpayers have questions. Here are some answers.

Kentucky wants to drape more than 3,000 miles of fiber-optic cable across the state. The high-speed network is supposed to connect about 1,000 government sites to one another and to the internet. The cable, organized in six massive loops, won’t connect directly to individual homes and businesses. But the state is banking on indirectly supporting the spread of high-speed internet by selling third-party internet service providers access to the new network, which is called KentuckyWired.

When Did This All Get Started?

Efforts to wire up individual communities have sprouted up for years in individual Kentucky communities. Eastern Kentucky’s Peoples Rural Telephone Cooperative, for example, installed high-speed fiber-optic lines within reach of every home and business in Jackson and Owsley counties using federal stimulus money made available in 2010. But a statewide version wasn’t introduced until Kentucky solicited bids for the KentuckyWired public-private partnership in July 2014. A team led by Macquarie, an Australian investment bank, won the bid in December 2014. Negotiations continued into the closing weeks of the administration of former Gov. Steve Beshear until a final deal was signed in September 2015.

Who Supported This and Why?

Initially, KentuckyWired won bipartisan support. Beshear, a Democrat, and longtime U.S. Rep. Hal Rogers, a Republican, pushed the project as a way to jump-start Kentucky’s rural economy. Lawmakers were told that Rogers would secure $20 million in federal grants and the state would only have to put up $30 million, at no additional cost to Kentucky taxpayers. The state would simply shift what it was already paying companies like AT&T for internet service to the team led by Macquarie that was building and operating the new state-owned network.

The Kentucky Department of Education warned Beshear administration officials that strict federal procurement rules would likely disqualify the project from taking from AT&T about $13 million that Kentucky schools paid annually for internet service, part of a federal program known as E-rate that subsidizes broadband access in public schools and libraries. Then-Commissioner of Education Terry Holliday warned Finance and Administration Cabinet Secretary Lori Flanery that KentuckyWired couldn’t qualify as early as February 2015, according to a June 2015 email on which was copied Mary Lassiter, Beshear’s former cabinet secretary. Flanery and Lassiter ignored the warnings, state Auditor Mike Harmon said in his September 2018 report on the project. 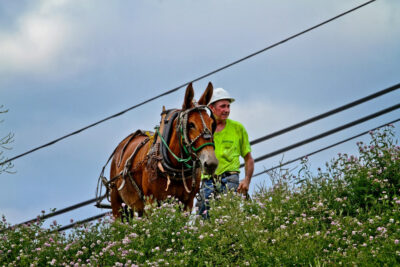 When the state issued a new bidding solicitation on school internet service in October 2015, AT&T lodged a protest. Less than a month later, the state canceled the solicitation. Suddenly, KentuckyWired had a 45% funding gap.

What Else Went Wrong?

As negotiations dragged on during 2015, the state quietly agreed to assume most of the risk for the public-private partnership. Kentucky is providing Macquarie with a steady stream of payments adding up to $1.2 billion over 30 years. But the state agreed to make those payments regardless of whether the network was generating revenue from the sale of access to third parties — something that still hasn’t begun.

And it agreed to cover the cost of unforeseen circumstances that experts say it probably should have foreseen. For example, the state promised to get the permission of AT&T, KentuckyWired’s primary competitor, to hang cable from some 12,000 utility poles the telecom giant owns in the state. It promised to do that in less than a month or pay penalties to the Macquarie team. In the end, it took more than seven months to get the necessary agreements.

In February 2019, the state finalized a settlement that pays Macquarie and its partners $93 million for that delay and others, and pushes back the project completion date two years to late 2020.

What Is Gov. Matt Bevin Doing to Get KentuckyWired Back on Track?

Bevin administration officials have been sending mixed messages about the project from Day One. At first, Bevin said he would scale back KentuckyWired. But after meeting with Rogers, he said he had solved the project’s funding problems without saying how. Bevin’s cabinet secretary Scott Brinkman says the project is “on the cusp” of generating revenue. But Bevin’s technology chief, his old Army buddy Chuck Grindle, who makes clear he does not directly supervise the project, has publicly disdained it. His job gives him the power to direct millions in state business annually away from KentuckyWired to other vendors.

What Are the Implications for the Governor’s Race?

Candidates for governor of both parties are now using KentuckyWired to bash Bevin. House Minority Leader Rocky Adkins, D-Sandy Hook, said Bevin’s “lack of commitment to keep it on schedule” has damaged the project, while Democratic candidate and former state Auditor Adam Edelen said Bevin “doesn’t care” enough to fix the project. The campaign manager for Attorney General Andy Beshear, the son of the former governor, called for “working together across party lines.” And state Rep. Robert Goforth, R-East Bernstadt, a challenger to Bevin for the Republican Party’s nomination for governor, said Bevin should have killed the project years ago and has much to learn from the Peoples Rural Telephone Cooperative broadband project in Jackson County, which Goforth represents.