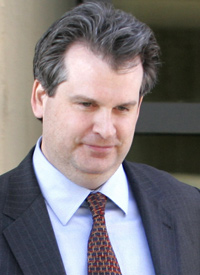 Mitchell Wade, who pleaded guilty three years ago to providing $1.8 million in outright bribes to then-congressman (and now felon) Randy "Duke" Cunningham, as well as making illegal campaign contributions to two other House Republicans, has given tips to authorities about five other members of Congress, according to his lawyers.

But it's questionable whether the tips amount to much.

In what has become a long-running saga, Wade is finally about to be sentenced in connection with his central role in the bribery scandal. His attorneys filed a brief (PDF) in federal court last week asking that Wade not be sentenced to any jail time.

They based their argument partly on the fact that Wade had "assisted the government in connection with inquiries relating to the activities of at least five other members of Congress."

The brief, filed by Wade's attorney, Howard M. Shapiro, didn't name those members of Congress, but writer Seth Hettena identified them in his blog as:

Hettena did not source the information, but he has covered the Cunningham scandal from its earliest days, first as a reporter for the Associated Press, then while writing a book about the scandal, and now as a blogger. In an e-mail to us, Hettena explained that he could not reveal his sources "for the usual Washington reasons. But it was information I developed and confirmed with two sources with knowledge of the investigation."

No charges have been filed against any of the five lawmakers, and there is no evidence of any current criminal investigations against any of them. Lewis, Goode, Mollohan and Harris have all come up in the case before and have all denied wrongdoing. As for Inouye, we have called his office for comment. (We'll update the post as soon as we hear back.)

Lewis, former chairman of the House Appropriations Committee, had been under investigation beginning in 2006 by the Office of the U.S. Attorney in Los Angeles. That case, which focused on Lewis' role in helping lobbyist Bill Lowery get earmarks for his clients (including Cunningham co-conspirator Brent Wilkes), is cold without any charges being filed.

Goode and Harris both were beneficiaries of a combined $78,000 in illegal campaign contributions from Wade and helped Wade in his efforts to get multimillion-dollar military intelligence contracts through earmarks.

But prosecutors have repeatedly said there was no evidence the two lawmakers knew the contributions were illegal and they are not the targets of any current investigations. Harris left the House to pursue a quixotic and failed bid in 2006 to win a seat in the U.S. Senate. Goode is awaiting a recount in his 2008 House race, with the initial tally showing he narrowly lost.

Mollohan received $23,000 in campaign contributions and gifts to a family foundation from Wade's company, MZM Inc., and another firm that did business with MZM, Hettena wrote in his blog on Monday, adding that in October 2002, MZM gave $20,000 to Mollohan's Summit PAC. The legality of those contributions has never been challenged.

The link to Inouye, set to take over the powerful Senate Appropriations Committee, is less clear but appears to involve the activities of one of Wade's co-conspirators, defense contractor Brent Wilkes, according to Hettena. There are no known allegations of misconduct against Inouye in connection with the Cunningham scandal.

Prosecutors, who are seeking a four-year prison sentence for Wade, submitted their own sentencing memo (PDF) to U.S. District Court Judge Ricardo M. Urbina. Without naming Harris and Goode, it alluded to Wade's help in those two dead-end probes. It made no apparent mention of inquiries into the other three members of Congress about whom Wade reportedly provided information to the government.

However, it did provide a tantalizing suggestion of another shoe to fall.

Wade answered questions related to "a large and important corruption investigation" unrelated to the Cunningham matter, wrote Jeffrey Taylor, the U.S. Attorney for the District of Columbia, and Howard Sklamberg, deputy chief of its Fraud and Public Corruption Section.

It added that "there have been, at this point, no charges filed."

Under sentencing guidelines, Wade faces a minimum of nine years in jail. His attorneys are asking for "a year of home detention, a fine of $250,000, five years probation and substantial community service."

Prosecutors lauded Wade for his "extremely extensive cooperation" but chided him for "mammoth acts of corruption." They are asking for four years of jail time, a 55 percent reduction of the minimum called for under the sentencing guidelines, and "a significant fine."

"Wade profited immensely from his criminal conduct. ...There has been no asset forfeiture in this case. Moreover, to this day, Wade remains a wealthy man and has the wherewithal to pay a large fine," they wrote.

Sentencing is set for Dec. 15.