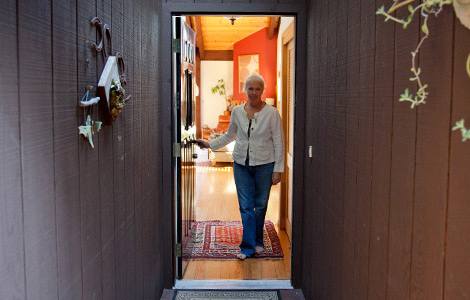 Suzanna Wertheim, of Oakland, Calif., has been in ‘loan modification limbo’ for more than a year. (Photo by Armand Emamdjomeh/ProPublica)

It all started shortly after Suzanna lost her job as a Hospice nurse and learned that she has terminal cancer. (Photo by Armand Emamdjomeh /ProPublica) 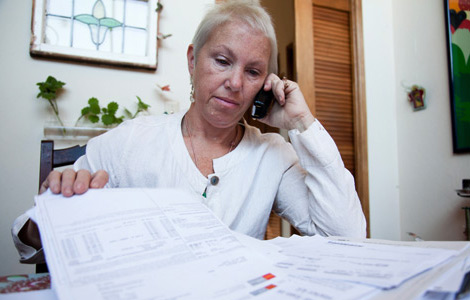 On working with Wells Fargo, Suzanna says, ‘I’ve faxed things into them five times one month, seven times the next month.’ (Photo by Armand Emamdjomeh/ProPublica) 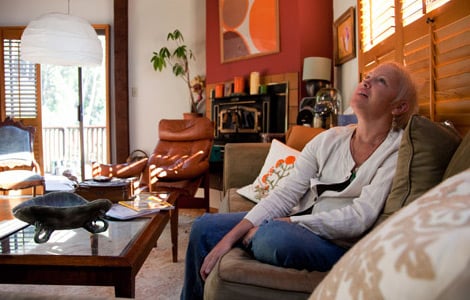 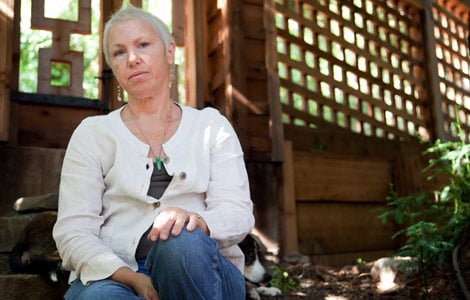 ‘It’s just between you and the bank,’ Suzanna says. ‘There’s no watchdog for all of this.’ (Photo by Armand Emamdjomeh/ProPublica) 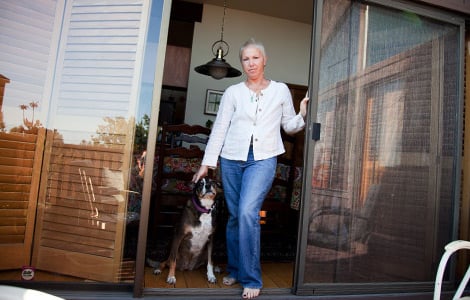 Suzanna also likened the process to ‘the Kremlin,’ and says, ‘I don’t think this is something we should be proud of.’ (Photo by Armand Emamdjomeh/ProPublica)

Listen to Suzanna Wertheim talk about trying to get a loan mod.

For Suzanna Wertheim, the problems came like a flash flood. First, she lost her job as a hospice nurse on the same day she learned she had terminal cancer. Then she was scammed by a company that said it could lower her property tax rate. Since that time in early 2009, Wertheim has spent hours making phone calls, writing letters and submitting financial statements in an effort to get Wells Fargo to modify her mortgage, but to no avail.

On average, homeowners who answered a ProPublica questionnaire had been seeking a modification for more than 14 months. Servicers are supposed to make a decision on whether to grant a trial modification within 30 days of receiving complete information from homeowners, according to program guidelines [PDF], and trials are supposed to last three months before borrowers are granted or denied a permanent change.

Wertheim says the process has taken so long because Wells Fargo keeps making mistakes. For example, Wells Fargo told her that she had no income, even though she says she has faxed proof of income over and over. Errors in calculating income are common, homeowners say.

After ProPublica contacted Wells Fargo for this story, Wertheim received a call saying she was denied a modification through the government program because she had insufficient income. Wertheim is now trying to regroup and determine if the denial was justified under the program's guidelines.

"We continue our efforts to help Ms. Wertheim find an option, and we regret any previous miscommunication," said Wells Fargo spokesman Jason Menke. "Depending on the complexities of any homeowner's situation, it can take some time to ensure that we have fully exhausted every option to help them avoid foreclosure."

In California, Kai Schmoll says he first contacted Bank of America last February, when his partner lost his job in the film industry and they were quickly working through their savings. Like many homeowners who responded to our questionnaire, Schmoll was current on his mortgage when he started the process but eventually couldn't make his payments as the modification dragged on.

Schmoll says he has submitted his documents five or six times, but Bank of America hasn't given him an answer either way. Many homeowners tell us they've submitted the same documents several times.

"We have never officially been denied," Schmoll said. Out of desperation, in the fall Schmoll paid a lawyer $1,600 to help with the modification process, but it was a scam. Soon after, the lawyer resigned from the California Bar after an investigation into his loan modification activities. The majority of the homeowners who told us they paid for help said they felt that they had been ripped off. (We've reported that foreclosure rescue scams are booming.)

Schmoll declined Bank of America's offer of an in-house modification that would have increased his payments. "We recently sent him a package requesting new updated financial information in hopes that his circumstances have changed to allow him to make a reasonable mortgage payment," Bank of America spokeswoman Jumana Bauwens said.

Meanwhile, housing problems persist around the nation, as almost 10 percent of mortgages in the U.S. are delinquent.

Have you been waiting to get an answer from your mortgage servicer? Please use the comments section below to discuss with other homeowners. And if you haven't already filled out our questionnaire, please tell us your story.