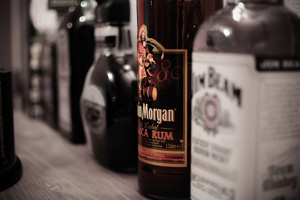 A transfer of billions of dollars in federal aid from public projects in Puerto Rico to one of the world's largest liquor conglomerates over the next 30 years continues to move forward without any objection from Congress.

As a result, money that's now being used to build schools and restore tropical forests in a U.S. territory is being turned into what is essentially a $3 billion tax break for London-based Diageo, whose $20 billion in sales last year were powered by Dom Pérignon, Captain Morgan and other popular brands.

Diageo's windfall at Puerto Rico's expense wouldn't be possible were it not for pricey lobbyists, the complexity of the nation's tax laws and Congress's ability to approve politically embarrassing deals with a sleight of hand that leaves little trace.

Diageo last year spent $2.25 million on lobbying activities, including $700,000 paid to DLA Piper, one of the world's largest legal and lobbying firms, which has an office seven blocks from the U.S. Capitol.

Lobbyists are known for targeting the House and Senate Appropriations committees, which draft all spending bills and have been famously referred to as "favor factories" by disgraced lobbyist Jack Abramoff. But the tax-writing House Ways and Means and Senate Finance committees -- which tacitly approved the Diageo deal by letting it go through -- actually dole out bigger favors with less notice.

The excise tax on rum is a prime example.

A $13.50 tax is collected on every proof gallon of rum produced off the U.S. mainland and sold in the United States. Most of the rum is made in Puerto Rico and the Virgin Islands, and Congress passes along almost all of the tax -- $13.25 -- to the two territories as economic aid, based on the amount of rum each produces. That generally means about $400 million for Puerto Rico, where industry leaders Diageo and Bacardi make their rum, and $80 million for the Virgin Islands, home of the world's fifth-largest rum maker, Cruzan.

The Virgin Islands also will give Diageo a 90 percent income-tax break, a complete exemption from property taxes and a state-of-the-art $165 million rum distillery, which is now under construction. Under the deal, which ProPublica wrote about in October 2008, Diageo will begin producing its rum there in 2012.

Puerto Rico, which expects to lose $6 billion directly and indirectly over the next 30 years because of the loss of Diageo, was caught off guard by the deal. It couldn't match the Virgin Islands' incentives because, unlike the Virgin Islands, it has a law capping the percentage of the rum-tax rebate it can give to its rum makers at 10 percent, not to exceed a total of $25 million in any single year. (It says it gives less than that -- 6 percent.) 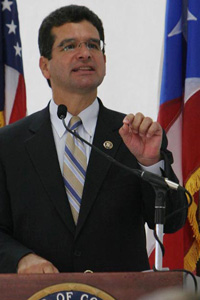 Puerto Rico's resident commissioner, Pedro Pierluisi, a nonvoting member of the U.S. House, is trying to quash the deal with a bill (PDF) he introduced last year. It would make the Virgin Islands subject to a 10 percent cap, too.

But the bill hasn't made it out of the starting gate.

It was referred to the Ways and Means Committee, where its chairman, Rep. Charles Rangel, D-N.Y., apparently has no plans to move it. Rangel has raised campaign money in both territories.

Puerto Rico Gov. Luis Fortuño did not initially lobby aggressively for the bill because his top priority in Washington has been health care reform, which could mean $10 billion in extra Medicaid money for the territories over the next 10 years.

But now, with the health care bill facing longer odds, Fortuño is stepping up his lobbying efforts, sendingwrittenappeals to members of Congress.

Roberto Serrallés, vice president of the Puerto Rican distillery that currently makes Captain Morgan rum for Diageo, recently traveled to Washington, where he appealed to the Hispanic Caucus to ask Rangel to hold hearings on Pierluisi's bill.

"This is about the common sense use of federal funds," Serrallés said in an interview before the meeting. "It's about putting some rules in place for a federal program that's gone astray."

Serrallés said the deal, as it stands now, will give Diageo a subsidy that is greater than the cost of the rum itself.

"It's going to be extremely hard for us to continue," said Serrallés, whose family has been making rum at its plant, Destilería Serrallés, since 1865. "How can I compete against someone who has a negative cost?"

A spokesman for Diageo, without elaborating, issued a terse statement denying that the tax subsidy it receives will be greater than the cost of the rum.

Like all Washington fights, this one has been a boon to lobbyists.

Puerto Rico is relying on its own internal lobbying arm in Washington, the Puerto Rico Federal Affairs Administration. The Conservation Trust of Puerto Rico, which will lose millions of dollars in annual funding for its land acquisitions if the Diageo deal stands, has hired Policy Impact Communications ($120,000) and, most recently, Quinn Gillespie & Associates ($40,000).

The Virgin Islands defends the deal by stressing the huge favorable impact it will have there. That argument was bolstered recently by a report (PDF) issued by the Congressional Research Service that said the Pierluisi bill "would result in severe limits on Puerto Rico's and the USVI's ability to finance economic development projects with this revenue source."

Puerto Rico's supporters point out that Puerto Rico has its own bonds backed by anticipated rum-tax money. The governor has laid off 17,000 public employees because of the sagging economy, and they say the loss of the rum-tax money will mean more layoffs.

Serrallés says transferring so much of the rum-tax rebate as a subsidy to Diageo and other rum makers will undermine congressional support for a vital assistance program that dates to 1917.

"These guys (the Virgin Islands) are prepared to give $3 billion, $4 billion to rum makers over the next 30 years," he said. "Congress is going to say, 'These people (the territories) can't control this program. It's all ending up in the hands of the rum makers.'"

But if members of Congress are worried about that perception, it's not evident yet.

Most of the rum-tax rebate is renewed automatically each year, without any action by Congress. But a small portion -- less than 8 percent -- must be approved by Congress.

Last month, that portion came up for a vote before the House, buried inside a much larger tax bill. If any lawmaker had concerns about the Diageo deal, that was a good time to speak up. Nobody did.

Now the tax bill goes to the Senate, where there is speculation it will be attached to the politically popular jobs bill. Buried inside such attractive legislation, the rum tax is likely to again slip through without debate.