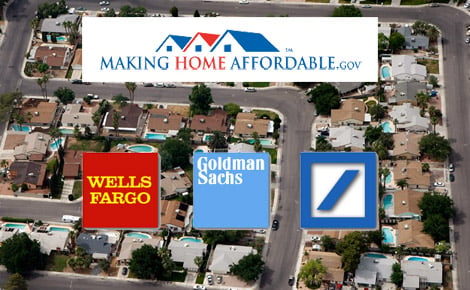 This story was co-produced with Marketplace.

Seventy-year-old Barbara Harris can’t help crying when she walks around her neighborhood. She says she hates seeing possessions piled up on front lawns — the remnants of foreclosure. Three times, the Harrises received foreclosure notices and thought they’d be next.

Like one in eight homeowners, the Harrises’ loan is part of a mortgage-backed security, a bundle of loans packaged together and sold off to investors. Ambiguous rules and the dispersed web of interests involved in securitized mortgages have created little accountability, leaving homeowners trapped. For homeowners with securitized mortgages, once they’re told an investor says no, there is little recourse.

A Problem for the Federal Program

Homeowners with securitized mortgages could be disproportionately denied modifications under the federal Making Home Affordable program. Under the program, participating mortgage companies must modify loans (PDF) for all qualified borrowers; the only exception is when a contract with investors prohibits the modification.

As ProPublica and other news outlets have reported, the program is off to a slow start. Even Treasury Department officials say the servicers are lagging. In written testimony to Congress on June 3, James Lockhart, the Federal Housing Finance Agency director,  singled out securitized mortgages as "especially challenging" hurdles for the program.

Homeowners, housing counselors and legal aid attorneys say that servicers have pointed to agreements with investors as preventing loan modifications. Because the Treasury Department has not released information about the reasons why modifications are being denied, it is impossible to know the full extent of the problem.

This conundrum hits those most in need; homeowners whose loans were securitized by banks are five times more likely to be severely delinquent (PDF) on payments than other homeowners.

The Harrises provide a good example of how a loan is packaged and resold to investors, and how that makes it difficult to modify their mortgage.

A Bad Loan from the Beginning

After carpenter bees damaged the Harrises’ siding and roof in 2004, they decided to refinance their mortgage so they could cash in on some of their home’s equity to cover the repairs. Barbara Harris saw an ad for a mortgage broker in the Georgia Bulletin, the weekly paper of the Catholic Archdiocese of Atlanta. "I specialize in helping people. Good, bad, no credit … FHA, VA, St. Benedict’s Parishioner … Si Habla Espanol," the ad read.

Harris called the broker, Shawna Sullivan of White Star Mortgage. "She sounded very nice," Harris says. "We even discussed what parish she was in. And she said she could get a loan for us."

Harris was no longer working, and her husband was about to retire after a career of civil and military service. The Harrises say Sullivan told them not to mention that they would soon be relying solely on fixed income. She steered them away from a Veterans Affairs loan and eventually returned with an offer from Wells Fargo for a $234,600 loan with a 7.625 percent interest rate. That would give them $21,000 in cash.

Sullivan never told the Harrises that they had an adjustable-rate mortgage and their interest rate could rise to 13.625 percent, they say.

"Why would we agree to that?" Harris says. She admits that they didn’t read the fine print on the mortgage papers. "We really trusted her," she says.

Sullivan did not return our calls. Mark Collins, the CEO of America’s Mortgage Broker LLC, which owns White Star Mortgage, confirmed that the Harrises would have qualified for a VA loan. Collins said he could only speculate as to why Sullivan, who no longer works at the firm, steered the Harrises to a subprime loan. In 2004, around half of subprime borrowers actually qualified for prime loans, according to an analysis by the Wall Street Journal.

Collins says it was reasonable for the Harrises to assume that their rate of 7.625 percent could be fixed, and that homeowners do not always understand that their loans will adjust. "You get so bombarded with so many papers and numbers, it’s really a shame," he says.

Stephen Krumm, the Harrises pro bono attorney from Atlanta Legal Aid, says, "An adjustable-rate loan is never appropriate for anybody who has a fixed income."

From a Suburban Home to GSAMP Trust 2004-WF

The Harrises also didn’t know that in the months after they refinanced, Wells Fargo sold their mortgage to Goldman Sachs, which in turn bundled the  loan and 2,827 others into a $435 million mortgage-backed security called "GSAMP Trust 2004-WF."

Goldman Sachs sold pieces of that security to outside investors. Now, Deutsche Bank is the trustee responsible for administering the security on behalf of investors, and Wells Fargo is the servicer on the loans, which means it collects the monthly payments and decides when to foreclose. The names of investors who actually buy mortgage-backed securities aren’t publicly available, but typically they can be foreign governments, 401(k)s, college endowments and pension funds. In any given security, "there could be literally anywhere from one to commonly several dozen institutional investors, and those institutional investors will be representing literally thousands of pensioners and individual investors," says Bill Frey, head of Greenwich Financial Services.

‘The investors need their money’

Harris says she always heard a similar refrain when she called Wells Fargo: "They said the investors need their money, and how do we expect them to get their money if we don’t pay."

Spokesman Kevin Waetke says Wells Fargo is working with "the investor" to come up with a solution for the Harrises, but both Goldman Sachs (the issuer) and Deutsche Bank (the trustee) told ProPublica that they were not involved. Deutsche Bank spokesman John Gallagher said servicers are "solely responsible" for deciding all modifications.

Wells Fargo refused to provide additional information about the investor or how it works with investors. Experts say investors rarely are involved in an individual loan modification decision. "The investors are a convenient scapegoat," says Guy Cecala, publisher of Inside Mortgage Finance. "There's no way for investors to veto a loan mod."

Wells Fargo says "the investor" won’t waive past-due debt, which in the Harrises' case, adds up to over $80,000 in accrued interest, overdue debt and various fees. Krumm, the Harrises’ attorney, said Wells Fargo has proposed adding all this to the loan; the modified principal balance would be $314,000. Comparable homes in the Harrises’ subdivision have sold for between $86,000 and $140,000 this year, according to the real estate Web site Zillow.com.

Wells Fargo’s proposal offers monthly payments of $2,041 — $300 more than the Harrises would pay under a Making Home Affordable modification.

Servicers like Wells Fargo rely on agreements with investors for guidance on when modifications are allowed. These pooling and servicing agreements (PSAs) are regularly cited as the reason a servicer can’t change a loan.

In reality, however, the contracts themselves generally don’t limit modifications. In a study due out this month,  researchers at UC Berkeley’s law school looked at the contracts covering three-quarters of the subprime loans that were securitized in 2006. The researchers found that only 8 percent prohibited modifications outright. About a third of the loans were in contracts that said nothing about modification, and the rest set some limits but generally gave the servicers a lot to leeway to modify, particularly for homeowners that had defaulted or would likely default soon.

That’s the case in the contract (section 4.01) that covers the Harrises’ loan. Under the agreement, Wells Fargo has the authority to "waive, modify or vary any term" of a loan if the servicer makes a "reasonable and prudent determination" that the modification is in the investor’s best interest. It states that Wells Fargo must ask permission to modify only if the mortgage is not currently in default or in imminent  danger of it.

"There typically is a fair amount of latitude to work with borrowers, which raises the question: Are servicers exercising their latitude?" says Pat McCoy, a law professor at the University of Connecticut.

The Threat of Lawsuits

Even though the PSAs generally are not very limiting, servicers still fear getting sued by investors. It has been one of the biggest obstacles to getting modifications, says a Treasury Department spokesperson.

"Servicers have indicated that they … are very concerned that if they do overmodifications of mortgage loans, that they would be subject to lawsuits," Tom Deutsch, the deputy executive director of the American Securitization Forum, said in a congressional hearing in November.

The contracts can be vague, and different investors often have different interests in the securities.  "It causes the servicer to want to watch their back more," says Kurt Eggert, a law professor at Chapman University in Orange, Calif. Doing little or nothing can be safest.

"It is not the job of the person running the investment to worry about whether the homeowners or the bank that created the loan is happy with the transaction," says Greenwich Financial’s Frey, who sued Countrywide in the only major lawsuit over modification. Frey says investment managers have a legal, fiduciary obligation to do what will make investors the most money.

He knows it sounds harsh, but he points out that the ultimate investors are generally ordinary people,  through retirement plans and pension funds. The government has attempted to address some of the legal barriers to modifications, but challenges in modifying securitized loans persist.

In late May, President Barack Obama signed a  bill that included a "safe harbor" provision designed to protect servicers from being sued by investors. The original draft of the legislation included a clause that provided protection "notwithstanding any investment contract between a servicer and a securitization vehicle or investor," but after lobbying efforts by Frey and other investors, Congress removed that clause from the final version of the law.

"It may not be as safe a harbor as they think," Frey says. "If they were to modify these loans en masse, and the safe harbor was not sufficient to protect them, the financial solvency of the firms would be called into question."

A Treasury Department spokeswoman said the administration believes it can reduce the fear of litigation by standardizing the requirements for modification and including a calculation to determine if investors make more money by modifying through the federal program than by foreclosing.

"I do believe that the president has made it possible that someone in the situation like my husband and I to be reprieved and helped," Harris says. But with so many players, when people like the Harrises are told the investor won’t allow a modification, there’s little recourse.

ProPublica will continue our reporting on the Making Home Affordable program. If you plan to apply for a modification, or already have, please tell us your story.