A version of this story was co-produced with the CBS News investigative unit for CBS Evening News With Katie Couric and aired on that program on Tuesday, Oct. 20, 2009. 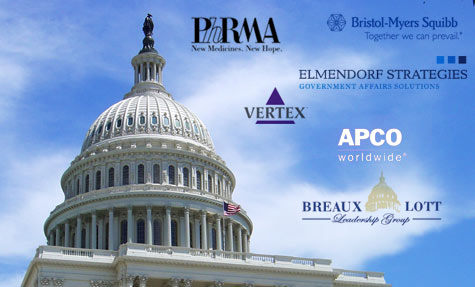 Six years ago, a group of lawmakers and aides crafted Medicare Part D, the prescription drug program for seniors that has produced billions of dollars of profits for pharmaceutical companies.

Today, at least 25 of those key players are back, but this time they’re lobbyists, trying to persuade their former colleagues to protect the lucrative system during the health care reform negotiations.

The role of big players like Billy Tauzin — the former Republican representative from Louisiana who is now president of PhRMA, the drug industry’s lobbying group — has been long understood. But a ProPublica analysis shows that the drug industry’s position is also being promoted by other foot soldiers from the Part D legislative process, from committee aides to top Bush administration officials.

The most prominent members of this group include:

Less familiar names also made the leap to lobbying for the pharmaceutical industry.

None of this is illegal as long as the former officials abide by a cooling off period —two years for senators and their staff, one year for representatives and their staff, as well as for senior agency staffers — before they personally lobby the Hill. In the interim they are free to accept jobs with lobbying firms and offer advice about strategy, tactics and the intricacies of the law.

“This is a phenomenon that is prevalent throughout Congress,” said Dave Levinthal, spokesman for the Center for Responsive Politics, a nonpartisan group in Washington that tracks lobbying activity. “They’re in Congress, out of Congress – then back lobbying their former colleagues.”

One former Congressional staffer who now works for the pharmaceutical industry refused to be quoted by name but said he sees nothing wrong with a revolving door between the public and private sectors.

“Every time a major bill passes, there is an exodus of Hill staffers,” the former staffer said in an e-mail to CBS News, which worked with ProPublica on this story. “In many cases, they have worked for 2-3 years on the legislation and then they go to work for firms with a stake in the implementation. These staffers, obviously, have a unique understanding of the issue and people are willing to pay a premium for that knowledge – even more so than for their so-called ‘connections.’”

As ideas for the prescription drug benefit were being debated, several proposals were introduced that would have allowed the government to negotiate for lower drug prices, as it does for the drugs it buys for Medicaid and for the Department of Veterans Affairs.

But after intense lobbying by pharmaceutical companies, and strong-arm tactics by House leaders, the final bill instead specifically barred the government from negotiating lower drug prices. It also banned importation of cheaper drugs from Canada and gave drug companies stronger protections against their generic competitors.

Congressional leaders pulled no punches in making sure the bill passed. In violation of House rules, members were given less than 24 hours to read the 850-page document, and the final vote was called about 3 a.m.

Instead of closing the vote 15 minutes after voting began, as required by House rules, leaders kept the vote open for almost three hours, the longest roll call vote in the history of the House of Representatives, while they worked the floor.

In 2006, Rep. Louise Slaughter, D-N.Y., called that night “the worst abuse of the legislative process I have seen during my 20 years in Congress.”

Indiana Republican Rep. Dan Burton also recalls the night as being ugly. “The votes were there to defeat the bill for two hours and 45 minutes and we had leaders going around and gathering around individuals, trying to twist their arms to get them to change their votes,” Burton told CBS’s 60 Minutes in 2007.

Today, the prices the government pays for drugs through Part D are about 30 percent higher on average than the prices it pays for drugs for Medicaid recipients, according to a 2008 report by the House Committee on Oversight. Another study by an economist at the University of Maryland also found a significant price difference.

Now the pharmaceutical industry is fighting for its bottom line again.

Its lobbyists are working against the House version of the health care reform bill, which would require drug companies to give up some of the windfall they gained as low-income seniors were transferred from Medicaid to Medicare during the Part D launch. Unlike Part D, Medicaid has strict rules to make sure it gets the lowest possible drug prices.

The Congressional Budget Office estimates such a requirement would save taxpayers $63 billion over the next 10 years. In the House bill, that money would be used to close the Part D “doughnut hole,” a nearly $3,500 gap in coverage plans that leaves seniors responsible for the full cost of their drugs.

The industry is also fighting a similar but more stringent proposal in the Senate – advocated by two Democratic Senators, Bill Nelson of Florida and Jay Rockefeller of West Virginia – that would save taxpayers more than $100 billion over the next 10 years, according to projections by the Congressional Budget Office.

Instead, the pharmaceutical industry supports the bill passed by the Senate Finance Committee, which apparently reflects an agreement negotiated between committee chairman Baucus, the White House and Tauzin, the former representative turned lobbyist.

Under that agreement, PhRMA would give seniors a discount on drugs they purchase while in the doughnut hole, a concession worth about $30 billion over the next 10 years. But in exchange two of the industry’s biggest legislative worries – any attempt to recover its windfall profits when seniors were moved from Medicaid to Medicare, and the legalization of re-importing cheaper drugs from Canada – would be off the table.

The two bills must still pass their respective houses of Congress. Then they will collide in conference committee negotiations before a final vote is taken.

The skills of government workers turned lobbyists are invaluable to the pharmaceutical industry during these negotiations.

John McManus, for instance, is described on his firm’s Web site as the “chief staff architect” of Part D, who “led the policy development, drafting and negotiations with interest groups” associated with the bill. That claim is based on his years as staff director for the House Ways and Means health subcommittee, including during the original Part D debate.

Before McManus went to work for the committee, he was a senior associate at pharmaceutical manufacturer Eli Lilly & Co. from 1993 to 1997. After he left the government, he founded the McManus Group, a lobbying firm that specializes in health matters. His latest lobbying disclosure indicates he is lobbying in “opposition to Medicare rebates” in the “House Tri-Committee health reform draft.”

She started her Hill career in Breaux’s office as legislative director and staff director for the Senate Special Committee on Aging. According to her biography, she “worked extensively on the Medicare and Medicaid programs while working in the Congress, including instrumental work on the Medicare Modernization Act,” the bill that established Part D.

In February 2005, Easton left to become a vice president at PhRMA, where her job was maximizing enrollment as Part D was rolled out. Less than a year later, she returned to the public sector as chief health counsel to Baucus, who opposed price negotiations during the original Part D debate and is now the lead sponsor of the bill that PhRMA supports.

Last year Easton joined Tarplin, Downs & Young, which specializes in health lobbying. So far in 2009, she has lobbied on behalf of Amgen, the Biotechnology Industry Organization, Boston Scientific, Genzyme, Vertex Pharma, Wyeth, AstraZeneca and PhRMA, according to disclosures filed with the House of Representatives.

Just over a week after moderate Republican Senator Lisa Murkowski voted against a version of health care reform being considered by the Senate health committee, Easton’s colleague, lobbyist Downs, co-hosted a $1,000-a-person fundraising breakfast for Murkowski at Charlie Palmer Steak.

The Capitol Hill restaurant, where Washington’s elite can choose from a breakfast menu that includes quail eggs and fig risotto, is a world away from the Department of Health and Human Services, the dowdy concrete fortress where Downs once spearheaded the agency’s efforts to shape Part D.

Downs’ former boss Thomas Scully — the former Medicare chief who is now senior counsel at Alston & Bird — was the only person mentioned in this article who agreed to be quoted by name. He said he sees nothing wrong with such lobbying efforts.

He also said he has no regrets about his role in getting Part D passed or about his career change. He’s listed in the firm’s disclosures as a lobbyist for drug maker CSL Behring on the topic of the “Medicaid rebate,” but said he isn’t lobbying much for industry these days.

“So much of this is politics,” Scully said. “People took lots of shots at me while I was in government, but it was people trying to get a political gain for five minutes.”

As for the other staffers who are now lobbying, he said, “Generally the people who understand these programs the best are the ones who have been working on them.

“They’re all good people,” he added. If they are lobbying, “they have every right to do it.”

Correction, Oct. 20, 2009: This post originally stated lawmakers and aides crafted the Medicare Part D plan four years ago. It should have said six years ago. This article also said that Billy Tauzin was a former senator in the 29th graph. He was actually a former representative.