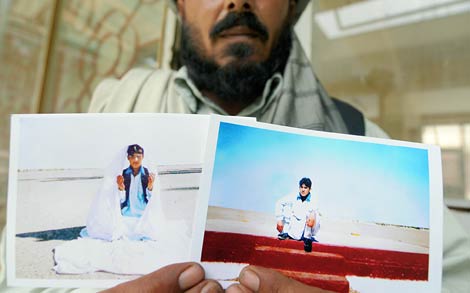 The federal judges who are reviewing lawsuits filed by Guantanamo inmates have found that 29 of the 35 men whose cases they’ve completed have been unlawfully detained. For ordinary convicted criminals, that would mean that the authorities who imprisoned them would have to let them go. But the jailer at Guantanamo – the executive branch – is still holding 20 detainees the judges have cleared for release.

The impasse over releasing these prisoners is usually discussed as a logistical problem of foreign diplomacy or domestic politics. But it also raises a deeper question of principle: What is the meaning of the constitutional right of habeas corpus – a core American right to be free from unjust imprisonment – in the new and potentially expanding context of terrorism detention?

The right appears in the original text of the Constitution and is meant to protect the liberty of individuals even when it’s politically unpopular. That protection comes from the federal courts, where judges are not elected but rather are kept independent of popular sentiment by lifetime appointments. Habeas petitions are most commonly filed by prisoners claiming errors in their convictions due to faulty forensic evidence, prosecutorial misconduct or other wrongs.

The traditional remedy to wrongful imprisonment is release. But in the case of the Guantanamo prisoners, the shape of justice has been much fuzzier. In June 2008, the Supreme Court said the detainees have the right to sue for their freedom via habeas petitions, ending years of litigation by the Bush administration to try to block them. But a February ruling by the federal appeals court in Washington – sought by the Bush administration and embraced by the Obama administration – declared that, while Guantanamo detainees have the right to sue and have their imprisonment found illegal, they don’t have a right to actual release.

The appeals court wasn’t moved by the fact that these foreigners had been taken against their will and erroneously placed under U.S. jurisdiction – a finding that trial judges have made in the overwhelming majority of cases so far. Instead, the court likened the captives’ predicament to that of undocumented immigrants who are caught, saying the president has wide discretion to detain people who for political reasons are difficult to send elsewhere.

Since the February decision, trial judges who’ve rejected the government’s evidence as too flimsy have been barred from ordering the president actually to release detainees. Now the judges resort to a vaguer admonition that the executive branch "take steps" toward releasing them. The appellate ruling overturned the order of Judge Ricardo Urbina of the U.S. District Court in Washington, who last October directed the government to immediately release a group of Chinese Muslim Uighurs into the United States, American judges not having the power to order release into a foreign country. Urbina wrote that officials’ failure for years to find a suitable country to take the Uighurs amounted to flouting "the court’s authority to safeguard an individual’s liberty from unbridled executive fiat" – an authority necessary, he said, to fulfill the constitutional promise of habeas corpus. Thirteen Uighurs remain at Guantanamo despite having been cleared of terrorism suspicions as early as 2003.

The decision blocking Urbina’s order was authored by Judge A. Raymond Randolph of the U.S. Court of Appeals for the District of Columbia  Circuit, who wrote three previous opinions rejecting constitutional claims by Guantanamo detainees. All those decisions were reversed by the Supreme Court. In April, lawyers for the Uighurs asked the high court to take their case and undo this decision as well. But in the meantime, the appeals court decision effectively applies to all the Guantanamo habeas cases, because they’re all governed by the D.C. Circuit.

The Obama administration has urged the Supreme Court to leave the decision alone, despite the president’s public pledge to "abide by" the trial judges’ rulings in habeas cases. The administration’s legal brief argued that detainees who remain at Guantanamo after judges have said they don’t belong there are not being imprisoned but rather are enjoying "harborage" while the president figures out the logistics for a safe release.

The Supreme Court recessed for the summer without saying if it would take the Uighurs’ case. Court observers speculated that the justices were reluctant to intervene at a politically sensitive time. Elected officials were strenuously opposing the idea of releasing detainees into this country, and the administration had managed to find homes abroad for four Uighurs. Recent news reports suggest the others may soon be resettled.

Just days before the court recessed, Congress stepped in to add a new wrinkle. It passed, and Obama signed, a law requiring the president to submit a report to legislators before any Guantanamo captive may be released or transferred using taxpayer funds.

It’s unclear how or whether the new law will affect the courts’ power to enforce detainees’ habeas rights. If Congress tries to delay the release of someone a court has found to be held unlawfully, some legal scholars say, the detainee could sue, claiming the law is an unconstitutional violation of his habeas right or of the separation of powers among the judicial, executive and legislative branches.

Meanwhile, the federal trial judges in Washington are continuing to scrutinize piles of classified evidence and hear closed-door arguments in more than 150 other Guantanamo cases, reviewing details about the detainees’ capture, their alleged hostile conduct and any mitigating facts. In six of the 35 cases completed to date, they’ve agreed with the president that the prisoners are so closely affiliated with al-Qaida or the Taliban that they should be detained indefinitely by the military. But in the vast majority of cases – the mildest and generally least complicated have gone first – they have decided against the government because of weak evidence or poor logic.

Two weeks ago, Judge Colleen Kollar-Kotelly blasted the government’s evidence for detaining Khalid Abdullah Mishal Al Mutairi, a Kuwaiti citizen, for more than seven years, saying the case was based on nothing but "speculation."

In June, Judge Richard Leon said Abdulrahim Abdul Razak Al Janko’s detention as a terrorist affiliate "defies common sense." Janko, a Syrian, may have associated with U.S. enemies for a few days in 2000, the judge said, but by his 2002 arrest, he’d been tortured by al-Qaida and imprisoned for a year and a half in an infamously "horrific" Taliban prison, the uncontested evidence showed. "Surely extreme treatment of that nature evinces a total evisceration of whatever [enemy] relationship might have existed!" wrote Leon, who has ruled against detainees more often than any other judge.

In May, Judge Gladys Kessler invalidated the imprisonment of a Yemeni man, Alla Ali Bin Ali Ahmed, explaining that the evidence against him "is hotly contested for a host of different reasons ranging from the fact that it contains second- and third-hand hearsay to allegations that it was obtained by torture."

The judges couldn’t order that these prisoners be released by a particular date, as they can in ordinary habeas cases. They wrote only that the government should "take all necessary and appropriate steps to facilitate" the detainees’ release "forthwith."

Asked when the detainees cleared so far will be released, Justice Department spokesman Dean Boyd told ProPublica that the State and Defense Departments and other agencies are "working to make appropriate arrangements to carry out transfers of these individuals in a manner consistent with national security and foreign policy interests of the United States, as well as U.S. policies concerning humane treatment."

The Washington Post, citing anonymous administration officials, reported Thursday that nearly a dozen countries have agreed to accept Guantanamo detainees, and that it has been difficult to repatriate some prisoners because they fear they will be persecuted if they return home.

One prominent Guantanamo case could test the now three-way tug-of-war among the branches of government over detainees’ rights. In an exception to the limited orders judges have been issuing, Judge Ellen Segal Huvelle recently directed that President Obama "promptly release" young Afghan Mohammed Jawad, whose detention was chiefly based on a confession that a military judge had earlier rejected for being obtained under death threats. She was able to do so because the administration had already volunteered to end Jawad’s widely criticized military detention and had proposed a concrete timeline for releasing him from Guantanamo. The government mentioned the possibility, which observers view as remote, of filing a more conventional criminal charge. Officials have said that some 30 detainees may ultimately be prosecuted in civilian or military court.

The judge accepted the timeline for releasing Jawad as soon as today, putting the government under court order to live up to its promise. But before Jawad can be put on a plane back to Afghanistan, the president must submit classified details about the transfer to Congress. Boyd said he was "not going to speculate" about what the president would do if Congress balked.

The unusual conflict over the power of the federal courts to enforce the habeas rights of terrorism suspects could affect more than the Guantanamo inmates and could become more complex. Detainees held for as long as six years at a U.S. air base in Bagram, Afghanistan, are also claiming the right of habeas corpus, in a case to be considered this year by the federal appeals court in Washington. And policy makers looking at U.S. detention strategy are pondering the habeas rights, if any, of future captives, as the fight continues against what many view as the global threat of terrorism.