This is the latest from our new Stimulus blog. 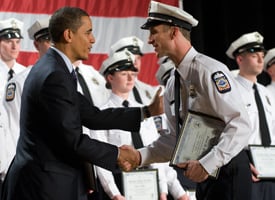 As many as 300,000 illegal immigrants could end up with stimulus jobs, reports the USA Today. South Florida cities have hired lobbyists to make their pitches for stimulus money. And Atlanta area officials released their list of "shovel-ready" road projects.

Police were on the radar over the weekend after President Obama's visit Friday to Columbus, Ohio, where he highlighted how some of the $2 billion for law enforcement assistance helped save the jobs of 25 police recruits who were going to be laid off. According to the White House, the stimulus will allow San Francisco to increase police patrols in high-crime areas; Bowling Green, Ky., to upgrade radio equipment; and Butler County, Pa., to construct a secure entrance to transport prisoners into the courthouse. See how much money your city is getting.

Project of the day: Sprinklers in the Olympian Apartments in Olympia, Wash., where a fire killed an elderly woman in 2004.