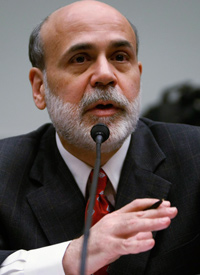 This afternoon, the Treasury Department released the details for how it will conduct a second round of bank investments. Briefly, the plan is to assess how the nation's 19 biggest banks would fare in a kind of worst-case scenario (e.g. unemployment hitting 10.3 percent in 2010, GDP dropped 3.3 percent in 2009, etc.), and then to force the bank to raise money (what the release calls an "additional capital buffer") to prepare for that pessimistic scenario. If the bank can't raise the money privately, the government will provide the cash. The tests are beginning immediately and should be finished by the end of April (PDF).

Judging from today's release, Treasury intends to treat institutions that need a lot more money differently from those that need less. Only those needing "exceptional assistance" -- defined as more than 2 percent of risk-weighted assets -- would qualify for stricter exec pay limits and other tougher terms.

What would be tough about them? It's not entirely clear yet: Amid the details released today, it only says that such institutions may be subject to "additional terms and conditions." But one indication of the administration's stricter approach is the executive compensation restrictions released earlier this month. Those guidelines limited execs at companies receiving "exceptional assistance" to $500,000 in total annual compensation (other than restricted stock), but only required execs at other institutions to disclose their salaries if they exceeded that amount.

Of course, the administration's plans to limit exec pay have been complicated by the limits in the stimulus bill, which were much broader and targeted bonuses, not salary. The administration has been openly critical of those limits, and it seems unclear for now whether they'll be instituted in that form. In the release today, the Treasury only promises to issue new exec limit rules sometime in the future.

To give you an idea of the size of the type of investments the government is considering, they'll be between 1 percent and 2 percent of risk-weighted assets. For a bank like Citigroup, total risk-weighted assets are $996.2 billion, according to the Federal Reserve. So under the new program, Citigroup could get an investment between $9.96 billion and $19.9 billion. If it got $20 billion or more, that would be "exceptional assistance."