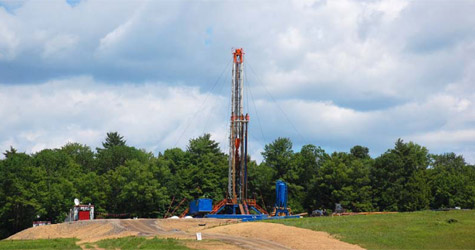 New York's recently released review of the environmental risks (PDF) posed by natural gas production in the Marcellus Shale offers the clearest picture yet of the chemicals used in the drilling process called hydraulic fracturing.

The document makes public the names of 260 chemicals, more than eight times as many as Pennsylvania state regulators have compiled. The list is the most complete released by any state or federal agency and could help answer concerns about hydraulic fracturing in Congress and in states where gas drilling has increased in recent years.

The review also takes another dramatic step by proposing that in certain situations companies that drill in New York be required to report the concentrations of the chemicals they use to state regulators, thereby creating a suite of information that environmental scientists say is essential to investigating water pollution from drilling. New York would be the first state to make such a demand.

The industry has been reluctant to release information about the chemicals it uses, because it considers them a proprietary trade secret. While New York has made the names of the chemicals public, it seems likely that the data about their concentration will be shared only with state officials.

The 800-page environmental impact assessment also proposes a slew of safeguards for well construction, waste disposal and water protection. If those rules are finalized after the ongoing public review period, New York's environmental protections for gas drilling would be among the strongest in the nation.

"In a number of areas these regulations are more stringent than in other states," said Kate Sinding, a senior attorney with the Natural Resources Defense Council. "As commendable as that is, and wanting to give the department credit where credit is due, the bar set in most other states is so abysmally low, it still begs the question of whether stronger is strong enough."

Environmental scientists have long sought complete information about the chemicals used in hydraulic fracturing, saying they need it to thoroughly investigate water pollution. Contamination can occur when the chemicals are pumped underground, held in waste pits or trucked to water treatment plants before being discharged back into rivers and drinking water supplies.

Colorado passed regulations last year requiring companies to disclose the names of chemicals, but they apply only to chemicals held in 50-gallons drums or larger. Now the industry is suing Colorado to repeal the group of regulations that includes that clause. In Pennsylvania, environment officials told ProPublica that their list of chemical products used for drilling there was complete, but it names just 39 products and 31 unique chemicals. Congress has been debating a bill to require disclosure, but the industry is fighting the legislation with millions of dollars in lobbying efforts.

The review, which was released last month, leaves some environmental concerns unanswered. It offers few specific measures to protect New York City's watershed -- the unfiltered source of drinking water for nearly half the state's population. It says that wastewater will be treated by facilities in New York and Pennsylvania, but does not confirm whether those plants have the capacity to receive Marcellus Shale wastewater or the technology to make that water safe. Critics also complain it does little to describe how several thousand new wells would cumulatively affect air and water quality, leaving the analysis to a per-well basis.

"The DEC's shocking refusal to assess cumulative impacts undermines the validity of the entire study and if implemented will lead to devastating, unanticipated outcomes," said Roger Downs, a conservation associate at the Sierra Club's Atlantic Chapter, which has called for a ban on drilling in New York despite the Sierra Club's general support for gas development in the United States.

The review does, however, deal directly with some of most critical problems that have led to contamination in other drilling states.

It suggests strict limits on the kind of open waste pits that have led to hundreds of cases of water contamination in other states; guarantees additional scientific review before drilling can happen near water supplies; and requires government inspectors to be more regularly involved at several stages of the drilling and fracturing processes. An environmental review, sometimes including public hearings, would be required each time a gas well is proposed within 150 feet of a private water well, stream or pond or within 300 feet of a reservoir. An additional environmental review would also be required before gas wells could be hydraulically fractured within 1,000 feet of water supply infrastructure, or within 2,000 feet of the surface. Private water wells within 1,000 feet of a gas well would be tested before drilling begins, to create a baseline for measuring any future pollution.

The review recommends requiring that chemical-laden wastewater from hydraulic fracturing be enclosed in steel tanks rather than pits at well sites, a practice that has been proven to reduce the risk of spills and prevent evaporation of chemicals into the air. Some waste could still be kept in open pits, but new rules would require that those pits be emptied after seven days, and that state inspectors check the pits and their liners before they can be used again.

The review also suggests strengthening structural requirements to prevent leaks from inside gas well pipes, and establishing an explicit chain of custody record to make sure drilling wastewater is delivered to treatment facilities that are capable of accepting it.

Yancey Roy, a spokesman for the DEC, declined to answer questions about the document. Instead he cited passages in the environmental review. New York's industry group, the Independent Oil and Gas Association of New York State, did not return calls for comment. Two prominent new natural gas industry associations -- America's Natural Gas Alliance and Energy In Depth -- also declined to comment on New York's rulemaking process.

The draft review, called the Supplemental Generic Environmental Impact Statement, updates the state's 1992 drilling study. It was ordered by Gov. David Paterson last summer after an investigation by ProPublica found that the state was not familiar with the chemical makeup of fracturing fluids and was unprepared to manage a boom of modern drilling in the Marcellus Shale.

The state has allowed for a 60-day comment period before the recommendations will be finalized and is holding four hearings across New York beginning later this month. Several state, city and federal lawmakers, including U.S. Sen. Kirsten Gillibrand, D-N.Y., have said the comment period is too short and called for an extension from the Nov. 30 deadline. Comments can be submitted online or sent by e-mail.