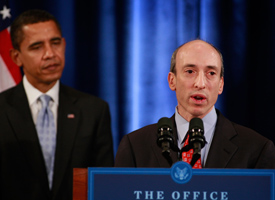 In the midst of a stream of financial scandals and regulatory failures, President-elect Barack Obama announced the nomination of two key regulators yesterday: Mary Schapiro as the chairman of the Securities and Exchange Commission and Gary Gensler to head the Commodity Futures Trading Commission. The two will be responsible for creating "a 21st century regulatory framework to ensure that a crisis like this can never happen again," said Obama.

The choice of Gensler for that mission is ironic. While in the Clinton administration, the former assistant Treasury secretary helped oppose regulation of the exotic derivatives at the center of the financial crisis.

Gensler was a top negotiator for the White House in discussions with Congress in support of the now-controversial Commodity Modernization Futures Act of 2000. The law largely prevented the SEC and the CFTC from regulating credit default swaps and other complex instruments that would later wreak havoc with financial markets. Gensler also played a prominent role in batting down an effort by the CFTC to regulate these derivatives. More recently, Gensler has led Obama's SEC transition team.

As we detailed a few months ago, in 1998 the then-chairman of the CFTC, Brooksley Born, had proposed that her agency regulate the rapidly growing market in derivatives, which allow investors to bet on the change in value of anything from interest rates to commodity prices. Regulators witnessed the dangers from these financial instruments when Orange County, Calif., declared bankruptcy in 1994 after it lost $1.6 billion in derivative trading.

Nonetheless, Born's efforts were beaten back by top Clinton officials. They argued that if the CFTC had jurisdiction over the market, it could call into question the legality of trillions of dollars in existing trades. Gensler, who helped shape the response to Born's proposal, told ProPublica last October, "There was a legitimate and widely held view that this aggravated the very question of legal certainty."

As the financial mess has unfolded, there has been a growing move in Congress to give the CFTC more power of financial derivatives. Iowa Democratic Sen. Tom Harkin has introduced legislation that would largely undo the Commodity Futures Modernization Act. The House Agriculture Committee has also looked into restoring the CFTC's authority over financial instruments like credit default swaps.

Bush administration Treasury Secretary Hank Paulson has proposed merging the CFTC with the SEC. “It could be that Gary is being brought in to shut it down or it could be a sign, given his prestige and clout that the CFTC is going to play a prominent role in regulatory reform,” said Michael Greenberger, who was the director of the commission’s division of Trading and Markets under Born.

A little more than a decade after Gensler worked to stop Born's vision of a stronger CFTC, it may now fall to him to make it a reality.

We've contacted Gensler and we'll update the post if and when he responds. 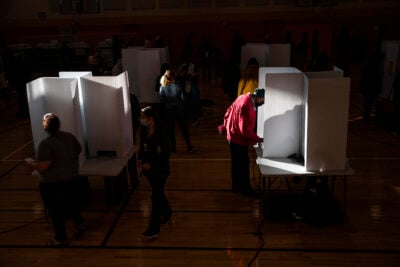