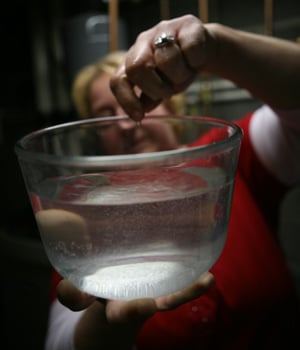 Pennsylvania residents whose streams and fields have been damaged by toxic spills and whose drinking water has allegedly been contaminated by drilling for natural gas are suing the Houston-based energy company that drilled the wells. A worker at the company is among the 15 families bringing suit.

The civil case, filed Thursday in U.S District Court in Scranton, Pa., seeks to stop future drilling in the Marcellus Shale by Cabot Oil and Gas near the town of Dimock. It also seeks to set up a trust fund to cover medical treatment for residents who say they have been sickened by pollutants. Health problems listed in the complaint include neurological and gastrointestinal illnesses; the complaint also alleges that at least one person's blood tests show toxic levels of the same metals found in the contaminated water.

The suit alleges that Cabot allowed methane and metals to seep into drinking water wells, failed to uphold terms of its contracts with landowners, and acted fraudulently when it said that the drilling process, including the chemicals used in the underground manipulation process called hydraulic fracturing, could not contaminate groundwater and posed no harm to the people who live there.

"We've been lied to, we've been pushed around, and enough is enough," said Julie Sautner, whose drinking water began showing high levels of methane, iron and aluminum in February and who is receiving fresh water deliveries from Cabot. "We need to push back."

A Cabot spokesman, Ken Komoroski, did not return calls for comment.

Among the 15 families bringing the case to court is Nolan Scott Ely, a Cabot employee who could lend an inside perspective to the case on how the company operates and how it has approached the myriad problems the company has had in Dimock. Nolan Ely did not return calls for comment.

Ely's relatives, who have lived in Dimock for generations, own several properties where Cabot has wells. In January a well at the home of Michael Ely, one of Nolan Ely's relatives who is also part of the lawsuit, caught fire after methane leaked underground into the water supply. At the top of the hill near Michael Ely's home is Cabot's Ely 6H well, which is among the most productive horizontal wells drilled in the Marcellus Shale. Cabot has touted Ely 6H as being one of the company's most profitable. 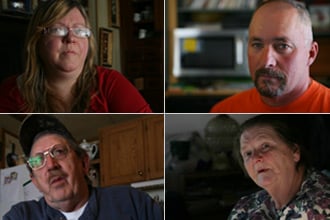 Cabot's problems in Dimock go back to January, when a drinking water well belonging to Norma Fiorentino -- who is a plaintiff in the lawsuit -- exploded after a methane buildup. Since then methane and metals have been found in numerous drinking water wells in the region. In the last year Pennsylvania's Department of Environmental Protection has determined that Cabot was responsible for several spills of diesel fuel and drilling mud and for an 8,000-gallon leak of hydraulic fracturing fluids being prepared by a contractor, Halliburton, that seeped into a fresh water stream in September.

The DEP concluded early on that faulty well construction allowed contaminants to leak from Cabot's wells into water supplies. In September, following the fracturing fluid spill, the state temporarily banned Cabot from hydraulically fracturing any more wells near Dimock, but that prohibition was lifted several weeks later.

On Nov. 4 the DEP issued a document listing more than a dozen infractions (PDF), including fracturing fluid spills, diesel spills and well-construction problems that allowed methane gas to seep underground into private drinking water wells. The document lists 13 families whose drinking water is affected by the contamination, many of whom are being supplied fresh drinking water by Cabot.

The lawsuit, filed by the New York City-based law firm Jacob D. Fuchsberg and two other firms based in Philadelphia, Pa., and Buffalo, N.Y., did not specify what monetary damages would be sought from Cabot. Dimock residents tell ProPublica that they would be entitled to two thirds of the net judgment after expenses if they win.

Lawyers handling the case did not respond to requests for comment.

In addition to the cost of health care and health monitoring, the suit seeks compensation for the loss of property values in the rural area -- something that would allow affected residents there, if nothing else, to leave.

"I don't think we've asked for the moon here," said Victoria Switzer, a Dimock resident who is party to the suit. "I mean, Norma just wanted water, for goodness' sake. The compensation, if it were enough to know that we could go away, that's all I want."