Last year was the worst Don Miller had seen in more than 20 years of running a graphic printing business in Norfolk, Va.

Business slumped 15 percent, and he had to lay off two of the three workers who helped him print stickers and signs for Navy ships.

Miller hopes to bring them back, but hiring will be more expensive for all Virginia business owners this year. The recession has emptied Virginia’s unemployment insurance trust fund, and the state is making up for it by raising taxes on employers and cutting benefits for seniors.

In 2009, the average business owner paid $95 per employee. This year, the tax will be $171, according to estimates by the state work force agency.

"It’s another added expense to hiring somebody," Miller says. "Everything’s going up and business is going down." 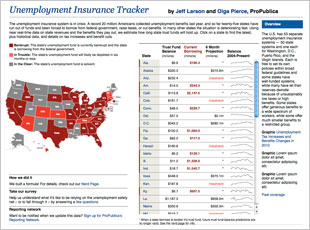 Similar tax increases are hitting employers nationwide this year as states struggle to pay the 5.5 million Americans currently collecting state jobless benefits. So far, high unemployment and, in many cases, poor planning have prompted 25 states to borrow more than $25 billion from the federal government to keep benefit checks in the mail.

In other states, unemployment compensation funds are still in the black, but reserves are rapidly dwindling. Nine more states likely will be borrowing by mid-year, according to a ProPublica analysis of state revenue and benefits.

Business owners in 36 states face tax increases ranging from a few dollars to nearly $1,000 per worker. Six states are scaling back or freezing benefits for the unemployed:

Instead of fulfilling the unemployment insurance system’s purpose of stimulating the economy, these measures may contribute to joblessness, says Gary Burtless, an economist who studies labor policy at the Brookings Institution. "We don’t want to pick this moment of all moments to boost taxes on employers," Burtless says. "We want to encourage employers as much as possible to add to their payrolls."

Workers are being hurt in another way — through benefit cuts. In Roanoke, Va., James Hay, 70, received a letter from the state informing him that his monthly benefits are being cut from about $800 to $100 because state law limits payments to Social Security recipients when the state’s fund runs low.

"I was devastated when I read it," Hay says. "I thought, ‘Lord, what am I going to buy heating oil with this winter?’ "

Like many other seniors, Hay was working full time to supplement his $1,400 monthly Social Security check, which he says was not enough to support him, his granddaughter and her two young children. Then the asphalt factory laid him off.

Unemployment insurance made up for some of the lost income, but now Hay is not sure how his family will get by. "We’ll just have to do whatever we can do," he says. "I hope and pray we’ll be all right."

The state hopes to save about $11 million through the cuts to seniors but anticipates borrowing about $1.3 billion to replenish its unemployment fund before the recession ends.

"The middle of a recession is when people need help most," says Maurice Emsellem, policy co-director of the National Employment Law Project, an advocacy group for low-wage workers. Cutting unemployment benefits, he says, "undermines the fundamental goals of the program — boosting the economy and keeping people out of poverty in an economic downturn."

Many states such as Virginia are already at or near the highest payroll tax rates allowed by law, and others have pushed politically difficult tax increases through their legislatures, making further benefit cuts likely if high unemployment persists, says Rich Hobbie, executive director of the National Association of State Workforce Agencies.

Some of the pain might have been avoidable. Long before the recession began, Virginia and many other states that have imposed tax increases or benefit cuts let their trust funds dwindle well below the 18 months of reserves the Labor Department recommends.

Virginia had to slow its need to borrow from the federal government despite the impact on businesses and seniors, says Republican state Sen. John Watkins, chairman of the Virginia Commission for the Unemployment Insurance Trust Fund. "I have angst for people who are unemployed," he says. "But our trust fund is busted — it’s gone."