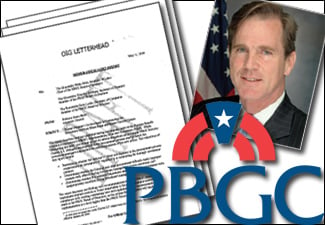 The former director of the federal agency that safeguards many of the nationâs pensions may have had inappropriate contacts with private firms picked to run its new investment strategy, according to a draft report by the agencyâs inspector general. The House Education and Labor Committee released the report and vowed to investigate.

The report asserts that the former director of the Pension Benefit Guaranty Corporation, Charles Millard, violated the agencyâs rules against offline conversations with potential fund managers, "communicating directly" with companies competing to manage billions of dollars.

"The former directorâs improper actions raise serious questions about the integrity of the process," the report said.

An executive at Goldman Sachs, one of three successful bidders, helped Millard look for a job after it received its contract, according to the inspector general's report. The executive, who was not named, forwarded Millard's resume and six news clips to "others in the financial community, including those with whom Goldman Sachs had a business relationship," the report said.

A message left by ProPublica at Millardâs home was not returned but the former director denied any impropriety in written comments to the inspector general. Millard, a former Lehman Brothers executive, said he inserted himself in the process because he was the person at the agency "most knowledgeable" about the investment firms. Some of the calls logged from his office might have been made by his assistant to arrange scheduling for meeting with bidders, he said.

Millard said the Goldman Sachs executive had helped with his job search because of a "deep, personal relationship between him and the executive and did not have any connection with the recent contract award."

Goldman Sachs did not respond to e-mails requesting comment.

Government contracts are awarded under strict rules intended to prevent companies from improper lobbying. Each bidder is supposed to have equal access to decision-makers under carefully proscribed conditions "conducted in a manner that is impartial, non-preferential, and avoids conflicts of interest or even the appearance of a conflict of interest in the Government/contractor relationship," according the IG.

The PBGC protects the pensions of nearly 44 million American workers and retirees whose employers have promised to pay a monthly sum to them upon retirement, in what are known as defined benefit plans. If the employer goes bankrupt or can no longer support its defined benefit plan, the PBGC steps in and assumes the responsibilities. As of February 2008, the agency paid pensions to 1.3 million Americans. The agency currently faces a deficit of more than $11 billion. A PBGC report obtained by ProPublica indicates that if the agencyâs assets remain constant (a zero percent growth rate annually), it could be bankrupt in as little as 15 years. (See update.)

In December 2007, Millard proposed increasing the allocation of stocks and real estate in the agencyâs portfolio -- $48.4 billion as of September 2008 -- arguing that this would be less risky over the long run. The IG report disagreed with this assessment, calling the decision to invest less money in fixed-income treasury securities "less conservative." (The IG is working on a report on the strategy which it said would be released âin the near future.â)

Millard pushed ahead with the strategy despite critical assessments from both the Congressional Budget Office and the General Accounting Office, documents show. He set aside only three months to review complex contract proposals that totaled many thousands of pages.

Sixteen firms bid. The winners, in addition to Goldman Sachs, were JP Morgan and BlackRock. JP Morgan did not return an e-mail seeking comment. BlackRock spokesperson Bobbie Collins said, "BlackRock does not comment on any client activities."

The firms won one-year contracts that could be renewed annually for nine years. The PBGC agreed to pay the winning firms a total of $10.3 million with individual payments ranging from $2.5 million for Goldman to $4.3 million for BlackRock. In the first year, the firms would purchase stocks, real estate and private equity for the agency worth $2.5 billion.

Millard was warned repeatedly by agency personnel not to have contact with potential vendors during the three-month procurement process from July 2008 to October 2008, advice the inspector general report says he disregarded.

The report said that there had been a total of 25 calls between Millardâs office and Goldman Sachs, JP Morgan and BlackRock during this "blackout period." It said Millard also called other bidders for the contract. Of the sixteen firms submitting bids, calls were logged from Millardâs phones with eight of the firms during the three months, according to the IG. Several of those calls were made to and from his cell phone, the report said.

Millard described institutional resistance within the agency as another reason he become actively involved in the contracting process.

âI always acted in the best interests of the agency," Millard wrote. "I exercised my authority and judgment in ways that were sometimes counter to staffâs wishes, and I took on additional work personally because I saw the need to change certain practices and to provide greater resources to an agency facing tremendous looming challenges with a limited staff.â

Millard called the charges that he pursued the partnerships to increase his chances of employment after leaving the agency "ridiculous."

âI already had numerous contacts at such firms and had worked in senior roles at two of them in the past,â he said. âI also fully understood that, under the ethic rules, I would not be able to work at any of the firms we selected.â

Update: After ProPublica filed this report, the PBGC announced that its deficit had grown to $33.5 billion.