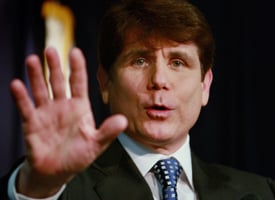 Who knew that reading the stimulus package could be so stimulating?

We’ve been scouring the $825 billion House version (PDF) of the pending economic stimulus bill this morning, and here are five curious clauses we've found so far. While we're making phone calls, please contact us with any others you find.

1. Blago Out, Stimulus Bucks In

No Illinois state agency can spend stimulus money without the state legislature's approval, the bill says, until a certain "Rod R. Blagojevich no longer holds the office of Governor of the State of Illinois." Ouch. We've put a call into the governor's office to see what he thinks of this.

The bill specifically prohibits stimulus funding "for any casino or other gambling establishment, aquarium, zoo, golf course, or swimming pool." No mention of roller-skating rinks.

3. At Least We'll Have Our Health

A variety of allocations in the bill go to health-related projects that do not appear to be directly related to the country's economic health, including $500 million to the Department of Health and Human Services for “evidence-based interventions in obesity, diabetes, heart disease, cancer, tobacco cessation and smoking prevention, and oral health," another $335 million for "domestic HIV/AIDS, viral hepatitis, sexually-transmitted diseases, and tuberculosis prevention programs," and $420 million for flu vaccine.

4. One Less Thing to Worry About

What's worse than the Great Depression II? Lava. The bill specifies $200 million to the U.S. Geological Survey for maintenance projects including "equipment replacement and upgrades including stream gages, and seismic and volcano monitoring systems..."

5. It Is Rocket Science

The bill sets aside $400 million for NASA, $250 million of which is for climate research projects. But the remaining $150 million is for "aeronautics." If they told us, we probably wouldn't understand.