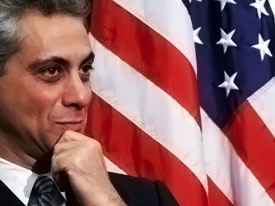 In between working in the Clinton White House and holding his own congressional seat, Rep. Rahm Emanuel (D-IL) took a brief, though highly profitable, detour to Wall Street. Now that Emanuel is returning to the White House as Barack Obama’s chief of staff, his journey is a particularly high-profile illustration of the revolving door between Washington, D.C., and Wall Street.

Two stories in particular, one from the Chicago Tribune in 2003 and the other from Fortune Magazine in 2006, have detailed Emanuel’s stint as an investment banker, which earned him more than $18 million in less than three years.

Fortuneexplained that Emanuel, nicknamed "Rahmbo" for his fierce attitude, had his own political aspirations while working as a senior advisor to President Clinton.

So in late 1998 he traded in Clinton as his boss for Bruce Wasserstein, a major Democratic donor and Wall Street financier. Over a 2 1/2-year period he helped broker deals -- often using political connections -- for Wasserstein Perella. By 2002, Emanuel emerged as a wealthy man with a reputation as a battle-hardened national strategist. That year he won a tough primary race for a seat in Congress that paid $138,000.

The Tribune’s story digs deeper to show that, while making money from Washington connections is plenty common, Emanuel did it "on a scale and with a speed that are rare." Just three months after leaving the White House, Emanuel was hired as the Chicago-based managing director for the now-defunct investment bank Wasserstein Perella.

And his nearly $18 million in earnings was "a striking sum even in the richly paid world of corporate deal-making, let alone for someone without an MBA or any prior business experience other than running a small political consultancy," Tribune reporter Mike Dorning wrote.

Russ Gerson, global head of financial markets for A.T. Kearney Executive Search, told the Tribune that Emanuel's compensation would put him "in the top 3 to 5 percent" of investment bankers at that time.

The Tribune wrote that Emanuel’s political connections earned him this desirable position, and then influenced his dealings at the bank:

Emanuel's two biggest deals involved politically connected utilities: one representing Commonwealth Edison's corporate parent in a merger and the other representing a buyer in the purchase of a home security business from telecom giant SBC Communications.

"Fundamentally, I brought in business and worked on business that was very successful," Emanuel said. "I didn't work on one deal. I didn't work on two deals. I think it was close to six or seven, of which a couple of them were over a billion dollars."

In each case, he worked to land the business either through a key executive he had come to know during his political career or was provided an introduction by a contact he developed through his political work.

Three of those clients were corporations controlled by major Democratic donors who developed relationships with Emanuel through their involvement in national party politics.

In response to questions from the Tribune’s reporter, Emanuel said, "That relationship and that exposure and that prior experience no doubt helped. But that ain't enough to get you over the goal line. At the end of the day, you've got to perform."

Also in 2000, President Clinton named Emanuel to federal mortgage firm Freddie Mac’s board of directors. ABC News recently reported that Emanuel served on the board at a time when trouble was brewing at the company, which is now owned by the government.

Emanuel left the Freddie Mac board and the investment bank in the middle of 2001 to campaign for Congress, an election he won handily.

The Tribune questioned whether Emanuel’s Wall Street days might have influenced his decisions as a congressman.

Shortly after taking his seat in Congress, in an effort to avoid any conflict of interest between the investment of his fortune and the performance of his legislative duties, Emanuel placed his assets in a series of blind trusts. Those trusts are designed to allow a lawmaker to vote and act on legislation ignorant of the impact on his own investments.

In the House, Emanuel serves on the Financial Services Committee, which handles legislation involving financial markets and banks, matters that directly affect his former employer and many former clients, including one whose firm recently purchased the American Stock Exchange.

Of course, as the Tribune pointed out, Emanuel is hardly the only politician to move quickly from government to a well-paid business gig and then back again. But Emanuel might not consider himself to be in such friendly company.

Vice President Dick Cheney, for instance, became chairman and CEO of Halliburton after serving as defense secretary under the first President Bush. And former Secretary of State James Baker went to the Carlyle Group, a private equity firm stocked with politicos.