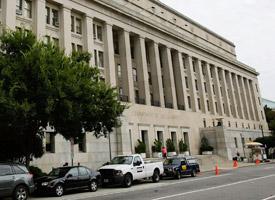 One of the figures at the core of the sex, drugs and oil scandal has pleaded guilty to a corruption charge, admitting that he traded favors for friends and former colleagues while a top official inside the beleaguered Minerals Management Service.

Milton Dial stood down from his position of deputy associate director inside the agency after the Department of Interior's inspector general started a wide-ranging investigation that uncovered illicit drug use, inappropriate sexual encounters and widespread acceptance of gifts from the oil industry inside a program Dial oversaw.

In federal court in Nevada on Monday, Dial admitted that he worked with his former colleague, Jimmy Mayberry, to help Mayberry's consulting company win a million-dollar contract from the minerals agency in 2003. Two years later, Dial quit his government job and went to work for Mayberry, earning $122,000 from the contract he'd drawn up.

Mayberry in July also pleaded guilty to violating conflict-of-interest laws. Both men face a maximum sentence of five years in prison and a $250,000 fine.

These are the only criminal charges to emerge so far amid a rash of critical reports targeting the MMS, in particular its Royalty-In-Kind program. As we wrote earlier this week, the Department of Justice has declined to prosecute other key figures but hasn't explained why.

"It's especially reprehensible that Justice isn't prosecuting Greg Smith, given all the allegations in the report," said Mandy Smithberger, spokeswoman for the Project on Government Oversight, a group that joined in legal action against the Royalty-In-Kind program.

Smith is accused of multiple ethics violations, including taking gifts from oil companies, freelancing as a consultant without permission and engaging in sex and drug use with subordinates. He resigned as Royalty-In-Kind director during the IG's investigation.

Smithberger said the corruption charges distract from deeper problems with the Denver-based program, which collects royalties from federal mineral leases in the form of oil and gas, selling what it receives on the open market and sending about $4 billion a year to the Treasury.

A Government Accountability Office report (PDF) published Friday found that the program hasn't been measuring how much oil and gas is coming out of the ground for some leases, in breach of its statutory duties. As a result, the government doesn't know how much the private companies that leased mineral rights actually owed taxpayers. Another GAO report (PDF) put the potential at between $21 billion and $53 billion annually.

The Minerals Management Service also oversees off-shore oil royalties, and with the House voting Tuesday to lift a longstanding moratorium on deep sea drilling, the Royalty-In-Kind program presumably will have more work in the future.

There may be further congressional efforts to rein in the royalties program as the energy bill moves through the Senate. The House version sets new rules governing gifts and drug testing in the royalty program and also requires that any in-kind payments are worth at least as much as the government should receive in cash. The bill leaves price setting and auditing responsibilities inside the Minerals Management Service, however, rather than giving that power to an independent body.

Smithberger welcomed the changes but said more needs to be done. "We think that having an independent auditing agency is something that everyone can agree to," she said.

The scandal is the focus of a hearing today by the House Committee on Natural Resources. Meanwhile, Rep. Henry Waxman (D-CA) has asked (PDF) the Interior Department for documents and transcripts of interviews collected during the IG's investigation.