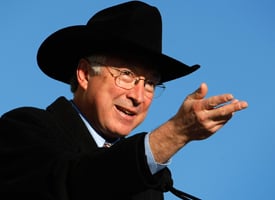 Within hours of inviting you to peek at Team Obama's financial disclosures yesterday, we were flooded with responses from readers who dug into the 179 forms to flag interesting tidbits. (Now pat yourselves on the back.)

One unusual finding came from the disclosure of Ken Salazar, secretary of the Interior Department. It shows that he has up to $200,000 in outstanding debt, a sharp contrast to the many millionaires serving in Obama's Cabinet and on his senior staff.

We were alerted to Salazar's disclosure by Jane Johnson, who in her e-mail to us noted, "Poor Ken is saddled with a bunch of student loans."

A call to Salazar's office clarified the matter.

Salazar, 54, has long since paid off his own student loans, so the debt represents loans he co-signed for his daughter's college expenses. The debt is listed at between $80,000 and $200,000, because the disclosures provide ranges, not specific numbers.

Another check of the forms showed that Bill Burton, Obama's deputy press secretary, also is paying back at least $15,000 in student loans from 1996.

It's probably not surprising that Salazar had to take out loans for his daughter's education, since he's been receiving a government paycheck for the last 10 years. He has a ranch and occasionally has had a private law practice, but he's also served two terms as Colorado's attorney general and has been in the U.S. Senate since 2005. Something also tells us he didn't get rich from his days as director of the Colorado Department of Natural Resources.

"Secretary Salazar is really committed to public service," his press secretary, Kendra Barkoff, told us. "He's doing this because he wants to make a difference."

Most of Obama's top staffers from Chicago, meanwhile, are worth a million dollars or more, according to a Chicago Tribune report today.

Obama’s chief of staff, Rahm Emanuel, has benefitted from the revolving door between Washington and Wall Street. After leaving the Clinton administration in 1998 -- and before running for Congress in 2001 -- Emanuel made more than $16 million as an investment banker. Last year he made at least $168,107 on an investment portfolio worth between $4.5 million and $11 million.

If you have something you want us to flag, as Jane Johnson did, shoot us an e-mail and we'll highlight your findings. And, if rummaging through documents is your thing, send a note to our editor of distributed reporting, Amanda Michel. She’ll alert you for our next document project.