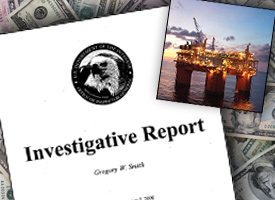 Before he became the man at the center of the Sex, Drugs, and Oil scandal, Gregory W. Smith ran a section of the Interior Department that manages $3.75 billion worth of government oil revenue.

Smith was one of the government's more obscure bureaucrats, in charge of selling the vast quantities of oil and gas that companies gave the government, instead of cash, as payment for their use of federal mineral leases. Those sales, which resulted in cash for the Federal treasury, were conducted under what is called the Royalty in Kind program.

According to the sensational inspector general's report (PDF) issued last week, Smith was "its senior-most representative to the oil and gas industry."

The report had some eye-catching allegations about Smith, including that he used his subordinates as suppliers of illicit drugs, including cocaine. One female staffer told investigators that Smith visited her at home in search of drugs and snorted crystal meth off her toaster oven.

Media coverage of the report highlighted the sex and drugs passages of the report, which took up only two of its 22 pages. In doing so, reporters gave scant attention to some equally juicy details about that other wellspring of Washington scandal: Money.

As told by the inspector general, the story began when Smith met Tony Daus, who was then the CEO of an environmental consulting called Geomatrix. The two men were flying first class from Denver to Houston in late 2001, and when they struck up a conversation, they quickly realized they worked in related fields. By the end of the flight, according to the report, they had agreed that Geomatrix would hire Smith to "market" their services to some of his big oil and gas contacts.

Geomatrix was bought by another engineering consulting firm, AMEC, in June this year. A spokesman for AMEC said they are "looking into this matter," and had no further comment. He did confirm that Daus is still working at AMEC.

The IG investigators spoke with executives from at least four oil and gas companies, who said they met with Geomatrix at Smith's request. They say the meetings turned into sales sessions, where Smith and Geomatrix reps gave them promotional materials and talked up Geomatrix's services.

They indicated they felt pressured into meeting Geomatrix because of Smith's position at the Interior Department, since he had power to make decisions affecting their business.

"I looked at him as a customer, and he asked," said James Lytal, a former employee of El Paso Corporation, one of the companies involved.

Others said they thought Smith's role as a Geomatrix salesman was "a bit strange," given his government position, and another brought a lawyer to the meeting to ensure that Smith didn't cross any ethical boundaries.

Interior Department rules allow employees to take on outside work, provided they have permission and scrupulously avoid conflicts of interest with their government work. The report said that Smith asked for approval for his Geomatrix work from Mary Ann Seidel, the Interior Department's in-house ethics officer. But Seidel said she never signed the document because Smith had not given her enough detail, in particular, the names of companies with whom Geomatrix did business.

Seidel told investigators that Smith knew how to fill out the form properly, as he had done so before. Smith had even taken a lead in educating his staff about the department's ethical rules. A month before his deal with Geomatrix, he sent a blast e-mail reminding staff that "it is important for us in the RIK office to pay especially close attention to the Federal ethics guidelines and to always keep them in mind in conducting our everyday business."

"In no circumstances would it be appropriate for a manager in particular or any employee to hawk their outside firm to any of the people that we regulated or did business with," Seidel told the IG investigators.

The Department of Justice has decided not to press any charges against Smith, but have not explained why not. A spokeswoman said the DoJ has charged a different former Interior Department employee for violating the conflict of interest law.

Geomatrix paid Smith $30,000 over 18 months at a rate of $75 an hour. The company terminated the contract in July 2003 because it had not managed to sign a single new client as a result of Smith's work.

Smith's attorney, Steve Peters, did not return calls for comment.