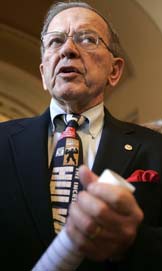 Ex-Sen. Ted Stevens’ (R-AK) case was an extraordinary one even before today’s move by the Justice Department to drop all charges, rendering his conviction null. Prosecutors went after one of the most senior senators on ethics charges, charging that he’d lied when he kept secret gifts received from a corrupt oil company. Even after his conviction shortly before Election Day, things stayed interesting, when it looked for awhile as if Alaska’s voters had elected a felon to represent them.

But he narrowly lost his bid for re-election, and today the Justice Department disclosed that prosecutors had withheld key evidence, including notes from an interview showing that Bill Allen, the CEO of that corrupt oil company, had given prosecutors a different account than he did at trial about a key piece of evidence.

The Justice Department will reportedly not pursue a retrial. We’ve given a fair amount of attention to this case (including examining the possibility that Stevens might receive a last-minute pardon from President Bush), so it’s worth being clear: In the eyes of the law now, Stevens is innocent.