Eleven years ago, with the stock market in free fall, Congress passed a $700 billion bailout of the financial system.

ProPublica was still in its infancy, our website only a few months old. Like everyone else, we were just trying to get a handle on what was happening.

It wasn’t easy. After starting out as the Troubled Asset Relief Program, a plan to buy up troubled mortgages, the TARP soon morphed into a bailout of the giant insurer AIG, the nation’s banks, and then the auto industry. It was hard to keep up. So we decided to try. 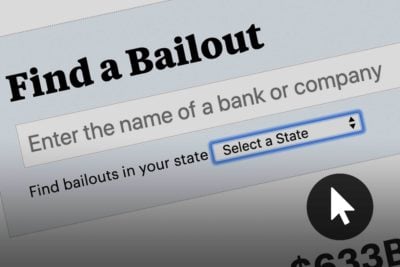 Our bailout database laid it all out as clearly as we could understand it. But it got harder. The Obama administration transformed the TARP into a mind-numbing array of acronyms, and we did our best to tell a PPIP from a AIFP (you don’t want to know). As the years went on and billions continued to flow back and forth, we remained vigilant. And, well, it turns out that bailouts are forever. We’re still updating the damn thing. So, recently, we decided to give it a makeover.

Yes, the TARP lives. So does its close cousin, the bailout of mammoth mortgage companies Fannie Mae and Freddie Mac. Like old friends from high school you haven’t thought about in ages, they’re still around, though to be frank their best years are behind them. You could think of our bailout database as their Facebook pages.

And what do you find when you go there? You can start with the 100,000-foot view, which we provide here, where we tally all the billions.

But you can also zoom in.

For instance, let’s take a look at the bank bailout stragglers. The biggest part of the TARP was the bank rescue, which invested $236 billion in over 700 banks. Almost all of those investments have been resolved, most resulting in a profit for the government, though over 100 did result in losses.

But there are six stragglers: banks that still, after a decade, have neither gone under nor paid the money back. The largest of those is OneUnited Bank, which received $12 million way back in 2008.

It’s not the first time that OneUnited has stood out. For a small bank, OneUnited has had remarkable pull in Washington: In 2008, Barney Frank, then the most powerful Democrat in the House on banking issues, said that he wrote a provision into the bailout bill to ensure the bank was rescued. (The bank is based in Massachusetts, Frank’s home state.) Rep. Maxine Waters, D-Calif., later faced ethics charges alleging that she had interceded on the bank’s behalf with Treasury Department officials — a potential violation because her husband held stock in the bank and had formerly been a board member. Waters was subsequently cleared of those charges.

In one respect, the rescue clearly worked. OneUnited, which claims to be the country’s largest black-owned bank, is still around. But the status of its TARP investment gives reason for worry. The bank was supposed to be making dividend payments, but it hasn’t made one since 2009. It owes $8.7 million in unpaid dividends on top of the $12 million in principal.

We asked the bank if it had a plan to repay the TARP money. The bank responded with a statement: “OneUnited Bank is in full compliance with its obligations to the U.S. Department of Treasury and continues to be committed to repaying TARP.”

OneUnited certainly isn’t the only example of a bank that benefitted from help on Capitol Hill. As we reported in 2009, Sen. Dan Inouye, D-Hawaii, (who has since passed away) put in a word for a struggling Hawaii bank. The bank did get TARP money but eventually went under anyway, leading to a taxpayer loss of $60 million.

The most active part of the TARP these days is its foreclosure prevention programs. We spent a lot of time reporting on the Obama administration’s all-carrot-and-no-stick approach to getting banks to help homeowners. Foreclosures peaked in 2009 and 2010, but the government spent almost all its money long after that. Like a firefighter who’s late to the fire but wants to try out the hose anyway, the Treasury has been spraying billions for years on the smoldering ruins of the crisis.

The Treasury extended the program into 2016, and because it will pay subsidies to banks, mortgage investors and borrowers for five more years, payments will continue into 2021.

Even with all that added time, the totals won’t come close to the sorts of numbers Obama officials announced when the program was launched. In 2009, they said $50 billion was available. Ten years later, the program has finally spent its 20 billionth dollar.

Download the bailout database, which includes data on expenditures by the Treasury Department.

Overall, the TARP remains in the black, though just barely. The Treasury realized large profits on its investments in the country’s largest banks and AIG, and those have balanced out the losses and subsidies. As of today, we show a narrow profit of about $1 billion for the TARP (though it should be noted these figures haven’t been adjusted for inflation).

The bailout of Fannie and Freddie, however, is a different story. After the government essentially took over the companies to stabilize the housing market in 2008, the Treasury pumped in nearly $200 billion over the following years. While the companies haven’t yet repaid any of the principal, they have been making sizeable dividend payments every quarter. Those now total $306 billion.

For years, Washington has tied itself in knots over the question of how to resolve the takeover of Fannie and Freddie. For now, the companies continue sending a few billion to the Treasury every quarter, which at least has the happy result of reducing the country’s now $1 trillion annual budget deficit a little bit.

So, go ahead, take a look at what your old friends have been up to. The financial crisis is long over, but the response might never be.