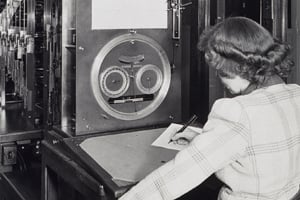 In 1940, the United States began constructing and expanding military bases overseas in preparation for the growing possibility of war with Japan and Germany. To make sure that the American civilians working abroad had coverage for injuries, Congress hastily created the Defense Base Act, passed in August 1941. The law, intended as a temporary measure for World War II, was only 2,000 words long. Essentially, it said that contractors working overseas had to purchase insurance similar to that required by an earlier workers' compensation law known as the Longshore and Harbor Worker's Act, passed in 1927.

Thus, a law passed 70 years ago to cover dock workers injured in American shipyards was extended by the start of the wars to cover nearly every contractor working in Iraq and Afghanistan under federal contract -- including a Nepalese cook hired by an Indian recruiting company to work for a Kuwaiti firm subcontracted to an American prime contractor headquartered in the Cayman Islands.

Initially, insurance carriers were reluctant to issue policies to cover civilians exposed to war-time dangers. To ease the concerns, Congress passed a second law in 1942 known as the War Hazards Compensation Act. The law promised to reimburse insurance carriers for civilians killed or injured in combat. Subsequent regulations added a 15 percent fee to cover the costs of handling such cases. The effect of the policy was to free carriers from having to pay high costs for deaths and maiming, while still paying for typical workplace injuries.

In remarkably prescient comments made in passing the law, Sen. Elbert D. Thomas of Utah made clear that the American government had the responsibility to pay for the care of anybody involved in helping to fight the war -- soldiers or contractors. "When once total war, spherical war, global war or whatever one may choose to call it, is undertaken, the sooner we bring home to our people the fact that all are responsible for the war, all might suffer by the war and therefore all should sustain the losses, the better off we will be in a social and governmental way."

In theory, Defense Base Act insurance is one of the most generous workers' compensation policies in the United States. The insurance provides for a death benefit which guarantees widows up to $62,000 per year tax free. Disabled workers are entitled to two-thirds of their salary each week in compensation for lost wages, also tax free. Injured workers are free to choose their own doctor. They can fight the insurance companies in an administrative legal system weighted in favor of workers.

In reality, the Defense Base Act has not lived up to the demands of modern warfare, where contractors from all over the world work in active battle zones alongside American soldiers, according to an investigation by the Times and ProPublica. Contractors, especially those with psychological injuries or those from foreign countries, are confronted with a nightmarish system of delays and denied benefits. The Department of Labor, which administers the act, actually has little power to enforce it. Nor has Congress done anything to amend the act to adjust to the far larger volume of claims, from scattered countries across the world.