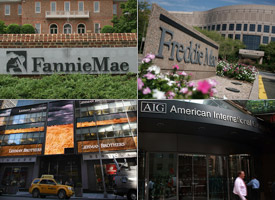 Itâs the sort of leak that quickly becomes indistinguishable from a press release. The FBI is probing four of the stricken companies at the center of the current financial crisis, reports the AP, Washington Post, New York Times, Wall Street Journal, and Bloomberg. All outlets cite anonymous law enforcement sources who, naturally, are not named because they âarenât authorizedâ to speak publicly. But the sources seem to have done a fine job of making sure their message is publicized.

Just what Fannie Mae and Freddie Mac, Lehman Brothers and the American International Group are being investigated is remarkably hazy. Most news sources mention âpossibleâ or âpotentialâ fraud. Only Bloomberg approaches specifics, reporting that investigators are reviewing âpossible accounting misstatements.â

The reason for the haziness is abundantly clear: The FBI doesnât seem to have a clear indication that a crime might have been committed. The sources caution that the investigation is preliminary and only recently begun. A âgovernment officialâ speaking to the New York Times provides the most candid explanation of the FBIâs interest, telling the Times that it was âlogical to assumeâ that those four companies would come under investigation because of the many questions surrounding their recent collapse.

Some of the pieces even come replete with efforts by the anonymous officials to tamp down expectations. The mortgage mess is so complicated that proving a criminal case will be very difficult, they say. Also, parts of the mortgage industry were so loosely regulated – or not regulated at all. That means far less information is available to investigators.

So why all the hullabaloo? The Times gets right to the heart of it in its lead: âThe Federal Bureau of Investigation, under pressure to look at possible criminal activity in the financial markets, is expanding its corporate fraud inquiries in the wake of the tumult in the last 10 days, officials said Tuesday.â Most of the sources, in fact, mention that the FBI is under considerable pressure to show that it is engaged in rooting out crimes that brought on the current crisis.

The FBI, in fact, has been trumpeting its efforts at cracking down on abuses in the subprime mortgage industry for quite some time. As we detailed back in July, the FBIâs strategy has been two-fold:  pursuing 1. low-level mortgage fraud investigations that occur on the local level and 2. corporate fraud or securities fraud by the national mortgage companies and Wall Street banks.

But most of the FBIâs successes thus far have been on the low end of the scale. âOperation Malicious Mortgage,â the FBIâs recent nationwide mortgage fraud campaign, led to charges against 400 defendants. Meanwhile, the Justice Department has charged two pairs of Wall Street bankers for securities fraud – one pair from Credit Suisse, the other from Bear Stearns, both of which dealt in mortgage-backed securities.

FBI Director Robert Mueller was keen to show the bureauâs commitment to those higher-level investigations at a Senate hearing last week: âI do want to assure this committee that although we have over 1,400 open cases and almost 500 [mortgage fraud-related] convictions in just the past two years, just like in the S&L crisis of the early 1990s, as well as the corporate excesses at the beginning of this decade, the FBI will pursue these cases as far up the corporate chain as is necessary to ensure that those responsible receive the justice they deserve.â

Reflecting that eagerness, the number of national corporations the FBI says are under investigation has been heading upwards. Last nightâs reports put the number at 26. Last week, Mueller testified that it was 24. When we reported on the prosecutions of the two Credit Suisse bankers three weeks ago, it was 19. In July, it was 18.

As to which ones those are, we only know a few: Two bankers from Bear Stearns have already been prosecuted. Then there are the four revealed last night: Lehman Brothers, AIG, and Fannie Mae and Freddie Mac. The Los Angeles Times has reported that a federal grand jury has issued subpoenas to Countrywide, New Century and IndyMac, three of the country's largest subprime mortgage lenders. Beyond that, itâs unclear. (Credit Suisse might or might not be included in that total, since FBI officials have not explicitly acknowledged that it is part of the mortgage crackdown.)

But as the Wall Street Journalnotes, investigators have yet to bag a dealmaker who symbolizes the current crisis the way Charles Keating, convicted for fraud related to the collapse of American Financial Corp., came to be the face of the S&L crisis. (Countrywide CEO Angelo Mozilo has at times seemed a likely candidate.) Until investigators land a big fish, the pressure is likely to continue.