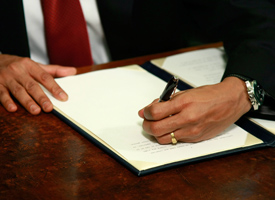 The existence of the memos became known after the American Civil Liberties Union sued the administration for failing to respond to a now-five-year-old Freedom of Information Act request, but specifics on the 181 classified letters and memos remain secret.

The CIA argued in court filings (PDF) that airing the documents would "neutralize" interrogation techniques, because terrorists can train to keep their lips sealed through the ordeals they expect to face if captured. A few days of successful resistance could mean the difference between an attack foiled and the loss of American lives, not to mention the cost and time required to develop replacement methods, the government has argued.

But that case recently got harder to make. In a Jan. 22 executive order, President Obama forbade any technique not listed in the public Army Field Manual (PDF). Last Friday, the ACLU pointed out in a U.S. Court of Appeals brief (PDF) that the CIA need not worry about terrorists training to resist techniques that the agency is no longer allowed to use.

"Our argument was that if you're not authorized to use the techniques, and aren't using them now, and won't be using them in the future, then what does it matter if they're neutralized," ACLU attorney Eunice Lee, who helped pen the brief, told us.

We posed the ACLU's question to the CIA, but a spokesman, George Little, declined to comment for our story.

Last month, we at ProPublica catalogued a host of "Missing Memos" but excluded the CIA's secret legal correspondence because so little is known about these classified documents. We do know they consist of letters, memos and e-mails about interrogation that circulated between the CIA and the Office of Legal Counsel, the arm of the Justice Department that produces binding interpretations of laws for executive branch agencies.

The only details the CIA has released are bare-bones (PDF), things like the number of pages, dates and levels of classification. For instance, "Document No. 29 is a 2-page letter dated 10 June 2004 from OLC to the CIA. It is classified TOP SECRET." It contains "legal advice on a matter of interest to the CIA."

Some of the legal documents address purely hypothetical interrogation challenges, including "the context in which their use was contemplated," according to the written declaration of Marilyn Dorn (PDF), an official in the CIA's National Clandestine Service. Others analyze the interrogations of specific detainees or specific techniques used by intelligence officers in the War on Terror.

Those types of documents would reveal "to our adversaries the counterterrorism playbook that the CIA intended to employ with them."

In a Sept. 6, 2006 speech, President Bush acknowledged, for the first time, the secret CIA detention network that included "black sites" and enhanced interrogation techniques. But, he said, "I cannot describe the specific methods used. I think you understand why. If I did, it would help the terrorists learn how to resist questioning and to keep information from us that we need to prevent new attacks on our country."

The documents contain "just the sort of specific details of the program that the President declined to disclose," the CIA’s Dorn said in her declaration.

Now that the CIA is limited to the Army Field Manual's 19 methods -- all publicly available (PDF) -- captured terrorists can know exactly what to expect: Notorious techniques like waterboarding and sleep deprivation have been replaced by more subtle tools like the "Direct" approach, in which interrogators simply ask questions, and the "File and Dossier" approach, in which interrogators fluff detainee records with blank sheets of paper and post-it notes to make victims believe all their secrets are on file.