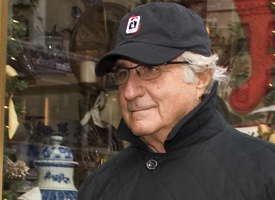 It just keeps getting worse for the SEC. Documents obtained by the Wall Street Journalshow the agency was downright lethargic in investigating allegations that Bernie Madoff was running "the worldâs largest Ponzi Scheme." And when it did probe, its investigation was half-hearted, almost apologetic, a lame attempt that appears to have been easily thwarted.

Harry Markopolos, an independent fraud investigator and derivatives expert, made it his hobby for nine years to uncover Madoffâs fraud. "Madoff was our fantasy sport," he tells the Journal. "We wanted him nailed."

Starting in 1999, Markopolos sent detailed memos to SEC staff outlining his case against Madoff. It had all started, he said, when he was working as a money manager at a rival investment firm. His bosses wanted him to match Madoffâs remarkable returns. But when he tried to replicate Madoffâs supposed strategy (trading a mix of stocks and stock-index options), he found that he couldnât. And when he asked other derivatives experts, they agreed it was impossible to match Madoffâs legendarily steady returns.

From there, he built a massive circumstantial case. He presented it in 1999, again in 2001 (an SEC official told him it appeared to have fallen through the cracks), and then again in 2005. The Journal has helpfully posted Markopolosâ 19-page memo, titled "The Worldâs Largest Hedge Fund is a Fraud."

It features no fewer than 29 "red flags." Those ranged from his inability to replicate Madoffâs returns to statements like "I have also spoken to the heads of various Wall Street equity derivative trading desks and every single one of the senior managers I spoke with told me that Bernie Madoff was a fraud."

It was "highly likely," he wrote, that "Madoff Securities is the worldâs largest Ponzi Scheme."

This time, the SEC did act. And the Journal has also posted the SECâs investigation opening and closing documents. In many ways, itâs an even more remarkable document than Markopolosâ memos.

The opening SEC memo, dated January, 2006, is brief and emphasizes the fact that Markopolosâ case was circumstantial: his memo "did not contain specific facts about the alleged Ponzi scheme, and the complainant was neither a [Madoff firm] insider nor an aggrieved investor." And so the SEC was not about to go in with guns blazing. It was only investigating in an "abundance of caution," because of "the substantial amounts at issue."

It did not issue subpoenas, rather making requests for voluntary production of documents from Madoff. (In his statement on Tuesday, SEC Chairman Christopher Cox noted this as one of the mistakes the agency had made.)

This is made all the more remarkable by the fact that Madoff had apparently already shown that he might try to thwart regulators. In 2005, the SEC had inspected Madoffâs broker-dealer business, and during that inspection, Madoff "did not fully disclose to the examination staff either the nature of the trading conducted in the hedge fund accounts or the number of such accounts," the memo says.

The investigation closed in 2007, finding "no evidence of fraud." SEC investigators had searched for evidence of a Ponzi scheme, and couldnât find any.

The reason the investigation failed is fairly clear. It only focused on Madoffâs hedge fund clients, accounts for which Madoff apparently could provide a satisfactory paper trail. Left out of that selection were a large number of Madoffâs other clients. The fact that the SEC did not issue any subpoenas helped constrain the scope of the probe.

But the investigation evidently convinced investigators that Madoff had "misled" SEC examiners during that 2005 inspection. This, however, did not trigger greater scrutiny.

The investigation closed in 2007, with no penalty for Madoff. He was required to register with the SEC as an investment adviser, because investigators found that heâd been wrong in failing to register separately from his broker-dealer business before then.

And that was it. About a year later, Madoff confessed to running a "giant Ponzi scheme."