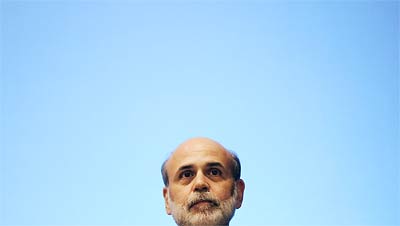 AIG may be singlehandedly saving hundreds of lawyers from unemployment: In the past week, it sued the IRS over a disputed $306 million in taxes, got sued by former CEO Hank Greenberg and hammered out a new deal with the U.S. that reaped it another $30 billion in aid.

AIG also may have sapped the last of the U.S.âs good will in the process: Federal Reserve Chairman Ben Bernanke lashed out at the companyâs irresponsibility on Tuesday. A Senate panel then demanded yesterday that the Fed name AIGâs trading partners benefiting from its bailout.

Freddie Macâs CEO â appointed by the government just six months ago â resigned amid heavy losses at the company, and Rep. Darrell Issa (R-CA) released documents he says prove Fannie Maeâs former CEO Franklin Raines was a "Friend of Angelo." Raines denied being a part of Countrywideâs VIP mortgage program at a December congressional hearing, and his lawyer denied it again in response to Issa.

Meanwhile, a handful of former Countrywide execs now "stand to make millions from the home mortgage mess" with a new company that buys dirt cheap loans from failed banks taken over by the government, reports the New York Times.

And the Wall Street Journal reported that Merrill Lynchâs top ten earners raked in a total of $209 million in cash and stock last year even though the firm lost billions. Merrillâs bonus payouts are being scrutinized by New York Attorney General Andrew Cuomo, who has subpoenaed several of those top execs. Finally, Portfolio finds several bailed-out banks still doling out perks to ex-employees.

If possible, Bernard Madoff made himself even less popular this week when his lawyers asked a judge to let his wife hang on to their apartment and $62 million in assets. But Madoff did relinquish ownership of his business, which means his victims may see a check in the mail this month. Meanwhile the U.K. is "considering the possibility of money-laundering charges" for Madoff and Vanity Fair rounded up gossip about the family behind Fairfield Greenwich Group, a Madoff feeder fund whose "due diligence" has been ridiculed.

The Obama Justice Department released nine Bush-era legal opinions on its "war on terror" on Monday, spurring calls for a "broad inquiry into interrogation, detention, surveillance and other practices" during the Bush administration. But the administration also repudiated many of those "highly questionable" counterterrorism stances in its waning days, ProPublica reported. (Weâve compiled an interactive list of the legal memos that are still being kept secret.)