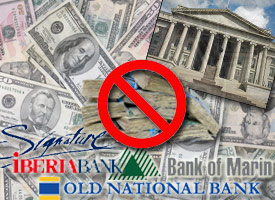 Since October, more than $300 billion has flowed from the Treasury Department to more than 500 banks, AIG and the auto companies. Now some of it is starting to come back.

As we noted in back in February when IberiaBank became the first to announce it planned to return the money, bank CEOs have generally been pretty vague about their reasons for backing out. They don't like being lumped together with the country's troubled large institutions just because they took Treasury money, and they certainly don't like being treated like they needed a bailout, they say.

Not one had specifically mentioned the new executive compensation limits -- until today. In a statement, Signature Bank's CEO said the limits added by Congress as part of the stimulus bill in February had been a deal breaker.

Under the new rules, Signature's five highest compensated executives would have seen their bonuses limited to no more than one-third of total annual compensation. Returning the funds, says CEO Joseph J. DePaolo, allows Signature "to execute our business model, which includes the successful recruitment and retention of highly talented banking professionals throughout the metropolitan New York area."

By our count, five other banks, bringing the total to eight, have notified Treasury that they'll be returning the money, all in the last five weeks, shortly after the new compensation limits were passed. All together, these banks received about $828.5 million.

In addition to these reimbursements, some money has also been coming to Treasury in the form of dividends on its preferred stock investments in the nation's banks. As of March 20, the banks had paid Treasury a total of $2.9 billion in dividends, according to a Government Accountability Office report today.

All told, then, Treasury has recovered about $3.2 billion from its more than $300 billion in loans and investments so far. Even by the administration's estimates, about one-third of that total won't ever be recovered.

Update: This post has been updated to include news that a fourth bank, Bank of Marin, also returned the Treasury’s investment.