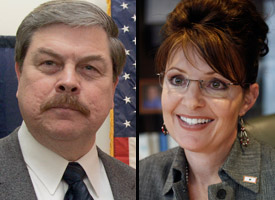 All eyes were focused last night on Gov. Sarah Palin's speech at the convention. But in the background -- page A27 to be exact -- details have continued to drip out about so-called Troopergate.

Palin, of course, has been accused of firing Alaska's top cop for refusing to do the governor's personal bidding and fire a trooper who was involved in a nasty divorce with Palin's sister. (For those looking to catch up, here's a backgrounder we've done.)

The governor has always denied that she pressured anybody or knew that anybody on her staff did. Today's Washington Post (on page A27) has some e-mails from Palin that complicate the governor's story.

Palin sent the e-mails in 2007 to Walter Monegan, Alaska's top law enforcement official whose firing set off the scandal. She wrote that Mike Wooten, her former brother-in-law, "continues to harass and intimidate his ex. -- even after being slapped with a restraining order that was lifted when his supervisors intervened."

Nowhere in the e-mails does Palin explicitly tell Monegan to fire the governor's ex-brother-in-law. Palin argued that Wooten's continued service as a trooper contributed to the "the erosion of faith Alaskans should have in their law enforcement officials." But she added, that was "just my opinion."

The Anchorage Daily News also points out that the e-mails "contradict a background paper recently released by the McCain-Palin campaign," which argued any pressure from Palin's family and staff was simply because they didn't know their complaints against Wooten (including that he tasered his step-son) had been investigated and Wooten disciplined. In one of the e-mails, Palin complains that an investigation only resulted in Wooten getting a "slap on the wrist."

Meanwhile, Palin and her supporters continued to try to derail the bipartisan investigation into "Troopergate" by Alaska's legislature. (Palin is pushing for the investigation to be handled by the state's personnel board, which consists of three members Palin appointed.)

A Palin aide who a recorded call shows explicitly pressuring Monegan to fire Wooten was slated to be interviewed yesterday under oath in the investigation, but he didn't show up.

The aide, Frank Bailey, has been on paid leave since mid-August when Palin released a recording of Bailey urging a state police official to kick Wooten to the curb.

"You know, Todd and Sarah are scratching their heads, you know, why on Earth -- why is this guy still representing the department?" says Bailey on the call. "I'm telling you honestly, I mean, she really likes Walt a lot, but on this issue, she feels like she doesn't know why there is absolutely no action for a year on this issue. It's very, very troubling to her and the family."

So why didn't he show up to testify yesterday?

"I canceled that," Bailey's lawyer told the Anchorage Daily News. "I'd say about 6 o'clock last night I learned that the governor's office was contesting the jurisdiction of the Legislature to handle this matter."