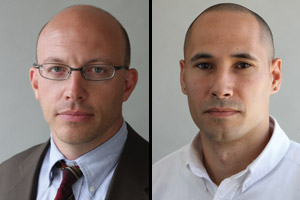 Miller won the top award in the Online category for "Disposable Army," along with Doug Smith and Francine Orr of the Los Angeles Times, Anvi Patel of ABC News and Pratap Chatterjee, an independent journalist and author.

The IRE judges said (PDF) that "...ProPublica's reporting with the Los Angeles Times and ABC News in the 'Disposable Army' series is remarkable for its depth and complexity..." and that "the reporting led to a congressional hearing and a systemic overhaul by the Labor Department and the Pentagon."

About Thompson's reporting on the aftermath of Katrina, the IRE judges commented (PDF) that Thompson "...conducted an examination that shed light on a sensitive subject and detailed a largely unexplored story..."

The top awards in the annual competition, the IRE Medals, were given to The New York Times for its "Toxic Waters" series and to KHOU, Houston for "Under Fire: Discrimination & Corruption in the Texas National Guard."

Congratulations to all IRE winners and finalists.

Update: This post has been updated to show that A.C. Thompson's reporting for "Katrina's Hidden Race War" also received support from The Investigative Fund.