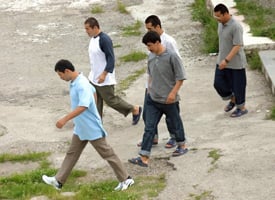 Seventeen ethnic Uighur men will stay in prison at Guantanamo Bay on Friday despite a U.S. district judge’s unprecedented order that they should be released. A Washington, D.C. appeals court on Wednesday granted a temporary stay at the request of the Justice Department, who argued that the release of the men to homes in the D.C. area presented national security concerns.

The men have been at Guantanamo for seven years, but on October 1 the Justice Department ruled that none of them are enemy combatants.

So how did they end up in the hands of American forces? The Justice Department says they were captured by U.S. forces and their allies. But other accounts say they were sold to the military by bounty hunters.

The story of the Uighurs’ capture is by no means clear. There are a few things all parties can agree on: The men are Muslims from the far west of China, an area that borders Kazakhstan, Afghanistan and Pakistan. The men were living in Afghanistan when the U.S. invasion of 2001 forced them to flee for Pakistan. It was near the border of Pakistan and Afghanistan that they fell into the hands of U.S. forces, and then were brought to Guantanamo.

The devil is in the details. What were the men doing in Afghanistan? Their defense attorneys have said they fled persecution in China, an entirely plausible scenario given the abuse of the Uighur minority in the Xinjiang region. Five Uighur detainees who were previously released to live in Albania told the New York Times they had traveled to central Asia in search of work, and ended up seeking food and shelter in a Uighur village near Tora Bora in Afghanistan.

There, they told the Times, the secretive leaders of a Uighur liberation group assigned them aliases and taught them to fire an AK-47.

Government lawyers contend that the Uighurs were receiving weapons training at a camp run by the East Turkestan Islamic Movement (ETIM), the most prominent militant group in a disparate movement for independence in Xinjiang, or East Turkestan as some Uighurs call it.

Not much is known about ETIM. A D.C. district court ruled in the case of Huzaifa Parhat in July that the government’s assertions about ETIM’s links to terrorist groups like al-Qaida and the Taliban were based on shaky evidence.

"Parhat has made a credible argument that -- at least for some of the assertions -- the common source is the Chinese government, which may be less than objective with respect to the Uighurs," Judge Merrick Garland wrote, according to the Washington Post. Parhat said his enemy was China, not the United States.

When the camp or village was bombed by U.S. forces, the Uighurs fled. Tuesday’s Justice Department statement has it that “these Uighurs were captured near Tora Bora by the United States and its allies following military operations against al Qaeda and the Taliban.”

It is not clear that they were captured in Afghanistan, however. The Uighurs in Albania told the Times that they crossed the mountains to Pakistan: “Villagers there sheltered and fed the Uighurs but then betrayed them to local security forces, which turned them over to the United States military.”

In his book, In the Line of Fire, former Pakistani President Pervez Musharraf wrote that his government had handed over hundreds of terror suspects to the U.S. in exchange for bounty.

"Many members of al-Qaeda fled Afghanistan and crossed the border into Pakistan," he wrote, according to the New Statesman. "We have played cat and mouse with them . . . We have captured 689 and handed over 369 to the United States. We have earned bounties totaling millions of dollars. Those who habitually accuse us of 'not doing enough' in the war on terror should simply ask the CIA how much prize money it has paid to the government of Pakistan."

The Uighurs may have been among those captured for bounty. Abu Bakker Qassim, who was released to Albania in 2006, wrote in a Times op-ed:

“Like hundreds of Guantánamo detainees, I was never a terrorist or a soldier. I was never even on a battlefield. Pakistani bounty hunters sold me and 17 other Uighurs to the United States military like animals for $5,000 a head. The Americans made a terrible mistake.”