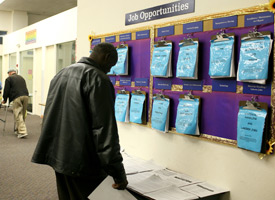 The idea of unemployment benefits, like any form of insurance, is to have a safety net when disaster strikes.

But hundreds of thousands of Americans are being forced to wait weeks for unemployment checks -- and longer for appeals -- in part because of a federal funding formula that forced cuts to state unemployment services even as the country slid into recession, the Washington Post found by analyzing Department of Labor records.

Unemployment insurance is paid for by a tax on employers, which is partially collected by the federal government and then redistributed. When the economy is not in freefall, this redistributes funding from states where unemployment is relatively low to states where it is high.

Last year, however, it took money away from states when they needed it most.

Virginian officials told the Post they simply cannot keep up with claims, which increased 84 percent last year, because federal funding cuts forced the state employment commission to fire 57 of its 1,109 employees and close five of its 37 workforce development offices.

As a result, the state, which is required by federal guidelines to pay 87 percent of claims within 14 days of approval paid only 74 percent on time, according to the Post analysis. Workers in the state who chose to appeal a denied claim had to wait even longer: only about 4.3 percent of cases received a hearing with 30 days in December, far short of the mandated 80 percent.

Couple that with other problems states are facing -- like online claim filing systems that are collapsing because of volume, hotlines that are busy and offices with long lines -- and you have droves of workers who qualify for help but must cope with collection agencies, cut-off utilities and eviction while they wait.