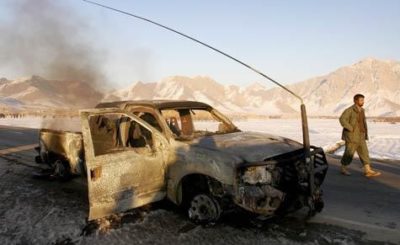 The U.S. Department of Labor has fined a private security contractor $75,000 for failing to file timely reports on the casualties of workers in Iraq as required by law. The Sandi Group, based in Washington D.C., delayed telling the Labor department that 30 of its employees had been killed while working for the company between 2003 and 2005, according to the department.

The Sandi Group, a privately held company known for employing large numbers of Iraqis as security guards, did not return requests for comment. Since 2005 the company has won U.S. government contracts worth at least $80.9 million, according to a federal contracting database.

The fine, believed to be the largest ever levied against a single company for failing to report war zone casualties in a timely manner, is part of an enforcement crackdown that began after a ProPublica series highlighted problems with a government program designed to provide health benefits to civilian contractors working in Iraq and Afghanistan. "Timely reporting of work-related injuries, illnesses and fatalities are vitally important to protect the interests of injured workers and their families," Gary A. Steinberg, acting director of the Department of Labor office which negotiated the settlement amount with the company, said in a prepared statement.

The Labor Department is responsible for administering an obscure government program called the Defense Base Act. The act requires that contractors working overseas for the U.S. government take out specialized insurance, similar to workers compensation, to provide medical treatment for injuries sustained on the job, or to pay death benefits in the event of work-related fatalities.

The ProPublica series found the system in shambles. Insurance companies routinely delayed payments and medical treatment to injured American workers, while charging taxpayers hundreds of millions of dollars for the policies. The Labor Department failed to bring enforcement actions against companies that flouted the law, even when federal administrative judges urged the agency to act. Foreign workers, such as Iraqi and Afghan translators who helped U.S. troops, frequently at risk to their own lives, often received no benefits at all.

Injured workers, however, say that problems remain. Marcie Hascall Clark has battled for years to receive medical treatment and lost wage payments for her husband, who was injured in Iraq. She says she hasn’t seen any improvement in a process she contends still moves too slowly. “The [Labor Department] is worse than ever,” said Clark, who runs a website for injured contractors.

As of December, 3,258 civilian contract workers had been killed or died in Iraq, and another 90,000 had reported injuries.

Correction: This post and headline has been corrected to show that 30 incidents which The Sandi Group delayed in reporting included both deaths and injuries of workers.