Blackwater Worldwide may have misrepresented its size to obtain small business contracts, the House oversight committee announced on Monday. The finding is the result of an investigation by the Small Business Administration (SBA), and it's just the first of three reviews of the controversial security contractor requested by Chairman Henry Waxman (D-CA). 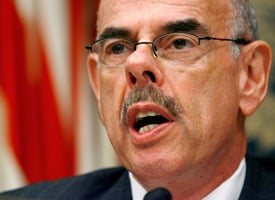 Unlike a number of investigations by the FBI and the committee itself that have focused on the conduct of Blackwater's guards in Iraq and Afghanistan -- for instance, the allegedly unprovoked shooting of Iraqi civilians -- Waxman appears to be taking a new tack: scrutinizing the contractor's employment practices to make it ineligible for future federal contracts.

In March, Rep. Waxman contacted the SBA, Internal Revenue Service (IRS) and Department of Labor (DOL) to ask each agency to conduct a review of Blackwater's compliance with federal employment laws. The first to report its findings (PDF), the SBA inspector general, determined that Blackwater and its affiliates may have obtained more than $100 million in contracts set aside for small businesses, in spite of receiving more than a billion dollars in federal contracts since 2002.

As Waxman explained in a memo (PDF) accompanying the launch of the three investigations, they each hinge on Blackwater's self-classification of its workers as contractors rather than employees. Waxman argues that classifying security personnel as contractors has allowed Blackwater to apply for small business contracts for which it wasn't eligible, underpay income taxes and workers benefits, and avoid complying with DOL anti-discrimination requirements for federal contractors.

Waxman has countered Blackwater's claims by pointing to statements by Erik Prince -- including in televised interviews (5:02-5:21) and congressional testimony (PDF) -- in which Blackwater's CEO says that his company maintains tight control over its personnel. Waxman also referred to the company's legal defense in a civil suit brought against it by the estates of four Blackwater guards killed in Fallujah. The company argued that because the four dead guards were employees, rather than contractors, the company's liabilities were limited to the provisions in the Defense Base Act.

In response to Waxman's memo, Blackwater called the charges baseless.

"Chairman Waxman's allegations regarding Blackwater's employment practices are completely without merit. Blackwater's classification of its personnel is accurate, and Blackwater has always been forthcoming about this aspect of its business with its customer, the U.S. government," the company said in a statement.

So far, Waxman's strategy seems to be working.

The SBA IG report states that the security contractor's small business applications "could have involved potential misrepresentations by Blackwater" -- a charge which, if true, could result in a fine, prison time and suspension from receiving federal contracts. The SBA IG referred the case against Blackwater to the Department of Defense and Veterans Affairs for further investigation, including a determination of possible penalties.

After the SBA report, Blackwater officials reiterated their belief in the accuracy of their worker classifications and pointed to the complexity of these rules. In a statement, the company said, "If after fair and complete examination of the facts, the appropriate authorities have alternate recommendations about our worker classification, we are open to considering other options so long as we can continue to serve our government clients in the best way possible."