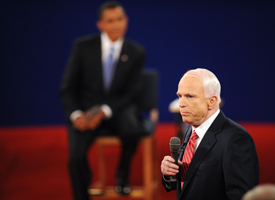 Both John McCain and Barack Obama took turns during the second presidential debate on Tuesday night claiming credit for having warned of an imminent economic crisis.

Obama has referred frequently to his 2007 letter to Treasury Secretary Henry Paulson. But Sen. McCain countered by saying that he had written a letter "warning of exactly this crisis." As far as we can tell, this was the first reference McCain has made of such a letter, and we couldn't find it. Despite multiple requests, the McCain campaign did not provide comment or the letter. 10/10 Update: The campaign did send the letter. See it here (PDF).

Obama likes to bring up the letter he wrote to Paulson and Federal Reserve Chairman Ben Bernanke. Dated March 22, 2007, about six weeks after he'd declared his candidacy for the presidency, the letter stressed the need for immediate intervention to curb the "rising rates of home foreclosure in the subprime mortgage market":

And while neither the government nor the private sector acting alone is capable of quickly balancing the important interests in widespread access to credit and responsible lending, both must act and act quickly.

Crediting the senator with a foresight others lacked, however, would be a stretch. The subprime mortgage crisis had been well underway for some time. See, for example, reporting by the New York Times in June 2005 on a growing housing crisis. A month later the Times wrote of the unease among federal banking regulators with regards to high-risk mortgage loans.

At Tuesday's debate, McCain added a new detail to his role as an early warrior against bad lending practices by Fannie Mae and Freddie Mac. Apparently he, too, wrote a letter:

I think if we act effectively -- if we stabilize the housing market, which I believe we can if we go out and buy up these bad loans so that people can have a new mortgage at the new value of their home; I think if we get rid of the cronyism and special interest influence in Washington so we can act more effectively -- my friend, I'd like you to see the letter that a group of senators and I wrote warning exactly of this crisis. Senator Obama's name was not on that letter.

McCain may have been referring to actions he took in support of the bill he co-sponsored in 2005 -- the Housing Enterprise Regulatory Reform Act -- which called for stricter regulations for Freddie Mac and Fannie Mae. When he joined as a co-sponsor in May 2006, about a year after it was first introduced, he made the following statement:

For years I have been concerned about the regulatory structure that governs Fannie Mae and Freddie Mac...and the sheer magnitude of these companies and the role they play in the housing market....If Congress does not act, American taxpayers will continue to be exposed to the enormous risk that Fannie Mae and Freddie Mac pose to the housing market, the overall financial system, and the economy as a whole.

But until we see his letter, we can't be sure.

Adding to the confusion is a statement he made during a November 2007 interview with the New Hampshire Keene Sentinel, which touched on, among other topics, the subprime mortgage crisis:

"I don't really know of hardly anybody who, with the exception of a handful, that said, wait a minute this thing is getting completely out of hand and is overheating. So, I'd like to tell you I did anticipate it, but I have to give you straight talk. I did not."

For those interested in reading up on the two candidates' positions on market reforms, see our complete rundown.