Arthur and Alberta Bailey are about to lose their home near New Orleans, and their mortgage company says one thing stands in the way of relief: The investors who own their mortgage won’t allow any modifications.

It’s a story heard again and again across the country as desperate homeowners try to participate in a federal program created to foster loan modifications and prevent foreclosures. Loan servicers say their hands are tied by Wall Street.

Federal officials, bank officers, housing counselors and investors themselves say that excuse is cited far more often than is justified. In fact, they say, few mortgage deals include such restrictions.

Consider the case of the Baileys. Litton, a subsidiary of Goldman Sachs, services their loan, and Litton’s contract with investors has no clear language banning modifications. In fact, documents show that over 115 other mortgages from the same investment pool have already been modified.

Even the representative of investors in the Baileys’ mortgage says only the servicer can decide when to modify loans. While he couldn’t comment on an individual case, Bank of New York Mellon spokesman Kevin Heine says it’s “misinformation” to say that investors make these decisions.

Servicers can pass the buck because one mortgage often involves many different companies. During the housing bubble, banks often sold mortgages to investors on Wall Street so they wouldn’t have to keep the loans on their own books, freeing them to make even more loans and protecting them from those that went bad. They then hired servicers to handle the day-to-day work of collecting payments from homeowners ­– and to decide when to modify loans. Now loan servicers have been inundated with requests from homeowners trying to avoid foreclosure through the government’s $75 billion mortgage modification program. The Treasury Department estimates that 1.7 million homeowners should qualify for help.

For homeowners, it can be difficult to understand who is responsible for what. This confusion gives servicers a ready excuse for refusing modifications.

Indeed, nobody knows the exact extent to which servicers are passing blame on to investors. Some housing counselors estimate that 10 percent of the denials they see are attributed to investors; others say they see as many as 40 percent. Either way, tens of thousands of homeowners may be affected, their attempts to modify their mortgage wrongly denied.

The prevalence of such false claims by servicers is a “legitimate concern,” said Laurie Maggiano, the Treasury Department’s director of policy for the modification program. “It’s been very frustrating for us.”

Investors are also dismayed, saying servicers are not acting in their best interests. “This is one of those rare alliances where investors and borrowers are on the same page,” according to Laurie Goodman, senior managing director at Amherst Securities, a brokerage firm that specializes in mortgage securities. She says investors have “zero vote” in determining individual loan modifications and, instead of foreclosures, prefer sustainable modifications that lower homeowners’ total debt.

Investor-owned mortgages represent more than a third of trial and permanent modifications in the government’s program. Under the program, servicers must modify the loans of qualified borrowers unless contracts with investors prohibit the modification, or if calculations determine that the investors won’t benefit from a modification. Investors’ contracts rarely prohibit modifications, and at times, ProPublica found, they have been blamed for denials even though other mortgages owned by the same investors have been modified.

Even when contracts with investors do have restrictions, servicers don’t appear to be following federal requirements that they ask investors for waivers to allow modifications.

Treasury’s Maggiano says the government is investigating investor denials and considering greater consequences for servicers that wrongfully deny modifications. Servicers’ compliance and accountability have been a major problem for the government’s program. Treasury has threatened penalties before, but it hasn’t yet issued any.

Whose decision is it?

“The very phrase ‘investor restriction,’ I think, is deliberately confusing,” says Joseph Sant, an attorney with Staten Island Legal Services, which represents homeowners in foreclosure. “What we’re talking about are not business entities or people, but inert documents.”

Typically, financial institutions set up mortgage-backed securities as a trust — legally their own entities — and then sell bonds from the trust to investors, which can range from mutual funds to pension funds. At the same time, they sign up trustees to manage the security and hire divisions of their own banks or other companies to act as servicers that work directly with homeowners.

While servicers often tell homeowners that investors decide whose loans can be adjusted, Heine, the spokesman for Bank of New York Mellon, one of the largest trustees that administer mortgage securities, says the responsibility to modify loans “falls squarely to the servicer.”

And the contracts that servicers often blame are usually not a roadblock. A report by John Hunt, a law professor at the University of California, Davis, looked at contracts (PDF) that covered three-quarters of the subprime loans securitized in 2006 and found that only 8 percent prohibited modifications outright. Almost two-thirds of the contracts explicitly gave servicers the authority to make modifications, particularly for homeowners who had defaulted or would likely default soon. The rest of the contracts did not address modifications.

Jeffrey Gentes, an attorney at the Connecticut Fair Housing Center who works with hundreds of homeowners across the state, estimates that in 80 percent of the cases in which he has seen the servicing contracts, no language prevents modifications as the servicers have claimed.

Homeowners’ advocates say that when they successfully disprove a contractual restriction, the servicer just gives another reason for denying the modification. “The investor is cited first until the borrower can prove it otherwise,” says Kevin Stein, associate director of the California Reinvestment Coalition, which helps low-income people and minority groups get access to financial services.

Sant, the Staten Island attorney, says a servicer told one client that the contract with investors forbade extending the length of the mortgage, one key way monthly payments can be reduced through government’s program. But the government has addressed the objection, ruling that if a servicer can’t extend the length of a mortgage, it can still give a modification and just add a balloon payment to the end of the loan. Sant pushed back on the servicer’s attorney, who dropped that reason for denial and instead said the homeowner had failed the computer model that determines eligibility. Sant currently is reviewing the case to determine how to proceed.

Struggling to get information

Homeowners looking to challenge investor restrictions need information that is not easily accessible, or sometimes even public. “All of the information seems to be in the hands of the servicers,” Stein says. “Even the investors don’t know what’s going on.”

Tracking down the servicer’s contract with investors, or even just the name of the mortgage-backed security that owns a loan, is often a struggle. Many homeowners and advocates report that servicers will not tell them the name of the security.

National City Mortgage turned down (PDF) Candice Sullivan’s request to modify the loan on her home in Northern California, writing that “the investor has denied the modification at this time.” On the phone, the servicer wouldn’t give Sullivan the name of the security that owns her loan, so Sullivan wrote a letter citing consumer protection laws (PDF) and asking for the information. PNC, which had bought National City, responded by stating (PDF), “We are unable to disclose any information regarding the investor of your loan due to our servicing contract with them.”

But in 1995, as part of efforts to increase consumer protections in the mortgage industry, Congress passed a law amending the Truth in Lending Act (section F) to require servicers to provide the name and contact information for the owner of a loan when a homeowner submits a written request. The Federal Reserve, which has authority over the Truth in Lending Act, confirmed the law’s requirement that the information be provided.

PNC declined to comment and referred us to the Mortgage Bankers Association, an industry group, which asserted that onerous requests from homeowners don’t require responses. It did not specify what it considered to be onerous.

These difficulties extend into court as well. Karen Gargamelli, an attorney with the nonprofit legal-services group Common Law in New York, says Bank of America took eight months to provide the contract that covered one client’s loan, despite being in state-mandated foreclosure settlement conferences. The bank produced the agreement only after a court order. After a year and a half in settlement conferences, the court-appointed negotiator recently found that the bank was not negotiating in “good faith” and recommended that a trial judge cancel the foreclosure.

Treasury has recently begun requiring servicers to provide a list of every potential restriction for every agreement that could impede a government modification. Though the department has not yet decided if it will make the list public, the government’s compliance teams will at a minimum have the list to check denials that homeowners or housing counselors bring to their attention.

“If there is a mistake made, the consequences are being felt by the homeowner, their family, their neighbors, the local government,” says Stein, of the California Reinvestment Coalition. “They are not being felt by the servicer.”

In limbo on the bayou

Sitting in his home in La Place, La., 20 miles north of New Orleans, Arthur Bailey says he is usually an optimist. At 68 years old, Bailey, a retired mechanic, thinks he’ll live “another 99” and hopes to live independently with his wife, Alberta, in their own home.

But after Hurricane Katrina, a series of problems, including complications from a change in mortgage servicers, left the Baileys behind on their loan. The new servicer, Litton, told them they had to pay up. Now they’re on the brink of foreclosure. 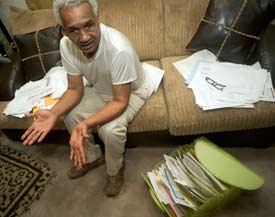 Photo by Matthew Hinton for ProPublica.

For two years, even before the government program began, the Baileys have been trying to get a modification. They say they can afford their original loan payment of around $500 but can’t pay the extra $238 a month that Litton demands to cover the late payments, accrued interest, and fees. Their only income is less than $1,600 a month from Social Security, and both are limited by health problems: Arthur had a stroke several years ago, and Alberta had a kidney transplant in February. “I’m a cripple putting off buying a $99 wheelchair,” Arthur Bailey said in his Louisiana drawl.

Despite the troubles, Litton isn’t planning to lower their monthly payments. “They are saying that the investor don’t want to do it,” Arthur Bailey said. “But the investor said Litton can do it.”

Alexa Milton, who oversees a team of counselors at Affordable Housing Centers of America, has been helping the Baileys try to get a modification and said Litton’s message is clear: “They seemed pretty straightforward in saying the investor prohibited all modifications of loans in the security.”

But data that the security’s trustee reported to investors shows that more than 115 mortgages in Bailey’s pool have been modified.

Litton told ProPublica that it cannot speak about a specific homeowner’s situation but said it encounters language in contracts "from time to time that prohibits the modification of loans.”

The Baileys have reached an impasse. Litton canceled a foreclosure sale in March when Alberta Bailey had major heart surgery after complications from the kidney transplant. Arthur Bailey says he is “just living in limbo.” Litton could put the house up for sale any day.