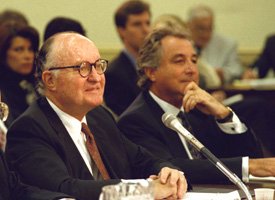 Bernard Madoff's firm managed $17.1 billion in assets, he declared this past January in his investment adviser filing with the SEC. He also checked the box showing that he had between one and five employees who performed investment advisory functions, including research, at the firm.

"That's unheard of," Peter Henning, a former SEC attorney and prosecutor, told ProPublica. "You wouldn't have a mutual fund run by one person. You have to have someone out there doing the research."

But there's no evidence that anyone paid much attention to the filing. According to reports, the SEC never inspected Madoff's firm, which first registered as an investment adviser in September 2006. That's despite years of suspicion of Madoff's remarkably consistent returns.

One whistleblower, a former exec at a rival firm, wrote the SEC as early as 1999 to warn that Madoff was running the "world's largest Ponzi Scheme." He repeated his warnings to the SEC through this past April. There were other critics and naysayers, including a 2001 article in Barron's questioning Madoff's unrealistically consistent returns.

The inspection likely never happened, the Washington Post reports, because the SEC "does not have the resources to examine investment advisers on a regular schedule." Instead, they target certain firms that use high-risk investment strategies -- and Madoff's didn't fit the profile. It also didn't hurt that he was a prominent fixture on Wall Street, a former chairman of the Nasdaq stock exchange. Only 10 percent of the 11,300 investment advisers registered with the SEC are examined on a regular basis, an SEC official tells the Post.

As we noted earlier, the SEC did scrutinize Madoff's firm twice before, once in 2005 and once in 2007. But both of those investigations focused on the broker-dealer side of Madoff's business, the Post reports, not on his money management business, which was run off of a separate floor. The first ended after finding minor infractions; the second fizzled out.

If the SEC had taken a look at Madoff's investment adviser business, a number of red flags might have warned them of the scheme. There's the lack of staff, as we noted above. There's also Madoff's auditor -- a shoestring operation run out of New City, N.Y. A "former SEC enforcement official" tells the Post that there are only a few accounting firms with the sophistication to audit an investment adviser of Madoff's size.

But the SEC didn't follow up on the complaints and suspicion. One reason, Henning said, might be the lack of any complaints from any of Madoff's clients. "One of the things you look for is a victim. That was the brilliance of what Madoff did. Everyone was making money so no one complained." The sheer scope of the fraud might have also been beyond imagining. "No one ever looks for a $50 billion Ponzi scheme. What he did is anything short of amazing."

In the SEC's defense, regulatory gaps kept Madoff off the radar screen for most of the years that he operated. As noted above, he first registered his advising business in late 2006. And both the Post and Bloomberg report that Madoff may have also run a separate advisory business that was not registered -- although it's unclear if that would have hid the fraud if the SEC had come knocking.

Note: One of ProPublica's funders, the JEHT Foundation, announced yesterday that it was shutting down, because the funds of its donors, Jeanne Levy-Church and Kenneth Levy-Church, were managed by Madoff.