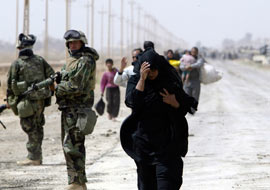 President-elect Barack Obama will inherit an ongoing humanitarian crisis in Iraq, including the largest population displacement the world has seen in many decades.

The United Nations High Commissioner for Refugees estimates that more than 2.7 million Iraqis have been displaced from their homes within Iraq, and up to an additional 2 million have fled across Iraq’s borders, the vast number to Syria and Jordan. There, they are not recognized as refugees and are often denied the right to work and access key social services.

"The international community is totally failing to address the severity of the situation," Yvonne Terlingen, who directs Amnesty International’s UN office, said at a Columbia University meeting last night, where experts discussed ways the new administration should address the crisis.The U.S. has come under particular criticism for what many see as its lackluster response to a refugee problem that it shares a large burden for creating.

Close to 13,000 Iraqi refugees arrived in the U.S. between January and September 2008, according to the UN refugee agency. That’s a more than four-fold jump over 2007’s arrivals, and the U.S. has committed to accepting 17,000 in 2009. Update: (According to the U.S. State Department, 13,823 Iraqi refugees were resettled in fiscal year 2008, and 1608 in fiscal year 2007, an eight-fold increase that resulted from a program established to assist and resettle Iraqi refugees, particularly those with special U.S. affiliations.)

But Pierre Bertrand, UNHCR’s New York director, called those numbers "insignificant" when compared with the tens of thousands of Iraqis who are particularly vulnerable and in need of permanent resettlement. Bertrand said the U.S. has a "moral residual responsibility for the displacement."

A State Department official contacted by ProPublica said, âWe really do recognize a special responsibility.â The official said that resettling 17,000 Iraqi refugees in fiscal 2009 was a minimum target. âWe hope to bring in many more.â The U.S. will also be accepting Iraqis who worked for the US through special immigrant visas, a program that resulted from legislation introduced by Senator Ted Kennedy (discussed recently by Ambassador James Foley, the State Department's senior coordinator on Iraqi refugee issues).

Ehab Al-Kuttub, case coordinator for The List Project in New York, is an Iraqi who worked with the U.S. Agency for International Development in Iraq and later came under attack from various local groups and received a death threat. He said the thousands who worked for the U.S. in Iraq and later became targets for extremists and insurgents bear the "tattoo of the collaborator."  He called on the new administration to help more Iraqis who helped America. "They believed in the values of democracy and freedom," he said. Al-Kuttub himself was recently granted asylum.

Experts at the meeting agreed that while security has improved somewhat in Iraq, it is too early to encourage the majority of Iraqis to return home.

"It’s not safe for people to go back and it shouldn’t be promoted," Human Rights Watch’s Bill Frelick said, pointing to recent research by the organization.

Rabih Torbah, Vice President for International Operations at International Medical Corps, said for now the new administration should press Iraq to use its vast budget surplus (though Iraq’s Finance Minister denies having such a surplus) to support the displaced within Iraq and in the neighboring countries that have taken in its citizens as part of a comprehensive strategy.

The experts also called for the U.S. to make its own serious multi-year financial commitment to addressing the crisis.

President-elect Obama’s intention to pull U.S. troops out of Iraq worried the International Rescue Committee’s Nathanial Hurd.  "There is a concern that the positive trends in security might go backward," Hurd said. "It’s a major, major concern."