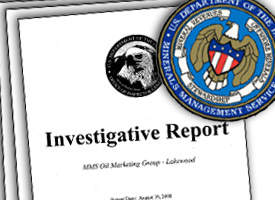 A series of inspector general reports alleging cocaine use and government regulators literally jumping into bed with Big Oil would make a splash regardless of when it came. But whether it was PR panache on the inspector general's part or a happy coincidence, yesterday's reports came just as Congress is set to debate expanding offshore drilling.

There will be hearings. And Speaker Nancy Pelosi (D-CA) has argued that "the allegations of illicit and unethical behavior...are directly related to the energy debate taking place in the Congress this week."

The Republicans have been pushing hard for widely expanding domestic offshore drilling in recent months. Yesterday House Democrats put forth a compromise: The plan (still sketchy) would open up the entire U.S. coastline with the exception of Florida's Gulf Coast while offering a host of sweeteners to encourage alternative energy programs. Drilling off a state's coast would require that state to "opt in."

The bill would also, the New York Timesreports, "repeal some federal subsidies for oil companies and seek to improve the collection of royalty payments."

Well, about those royalty payments. Yesterday's reports focus on the Minerals Management Service, an Interior Department agency that collects royalties from oil companies drilling on federal land. And while the reports on sex and perks were by far the most colorful, they were the culmination of several critical reports on the chronically troubled office -- troubles that stretch back a decade and show that the coziness between government employees and oil companies has come with a cost.

One report focused on MMS officials' lax handling of oil sales contracts -- companies were allowed to submit bids after deadlines or change the details of contracts. The inspector general examined 718 bid packages and turned up changes to 118 that appeared to help the companies by $4.4 million. But that was just a sample. "The MMS administers tens of thousands of contracts, and inspections of those could reveal losses to taxpayers up to hundreds of millions of dollars," the Denver Postreported, citing "former and current Interior sources."

This June, a Government Accountability Office report found that an MMS oversight in 1998 and 1999 had potentially cost taxpayers billions of dollars in forgone royalties from drilling in the Gulf of Mexico -- namely from $4.3 billion and $14.7 billion.

So as debate gets going in Congress, just what is done to improve the MMS's performance will be crucial. The inspector general laid out a host of suggested reforms in his cover letter (PDF) accompanying his reports. House reform committee Chair Henry Waxman (D-CA) will focus on the MMS partying, philandering and favor-taking in a hearing next week (to the objections of Republicans, who wonder why such a hearing couldn't have come earlier). We'll keep an eye on what finally emerges.