Sometimes a number best tells the story. Especially if the story is simply that the U.S. has dropped a ton of money on contractors in Iraq. 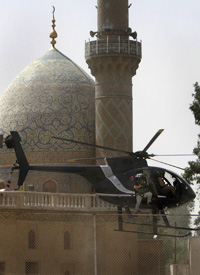 By the end of this year, the U.S. will have spent $100 billion on contractors, says the Congressional Budget Office in a report just released this morning (PDF).

Contractor spending accounted for about 20 percent of the war costs through 2007. According to the report, as of the beginning of 2008 there were approximately 190,000 contractor personnel in the Iraq theater (which includes the surrounding countries). That's about equal to the number of military personnel there.

The report provides a fascinating breakdown of the ratio of contractor to military personnel in past wars. The records suggest the U.S. has historically relied much less on contractors, from the U.S. Revolutionary War (1 to 6), the Civil War (1 to 5), World War II (1 to 7), to Vietnam (1 to 5), and so on.

The historical low point for reliance on contractors, interestingly, was the Gulf War, where the ratio was 1 to 55. The report notes that Saudi Arabia "provided significant amounts of products and services" during that conflict. The conflict in the Balkans was the sole one to have a similar ratio, with both 20,000 soldiers and contractor employees involved.

What the report does not provide is a breakdown of contractor expenditures in past U.S. wars -- which makes one curious to see how the Iraq War would stack up against the cost of U.S. wars. (Here's a breakdown in 2008 dollars and as a percentage of GDP.)

The biggest contractor in Iraq, in both people and money terms, is KBR, which has 40,000 workers there. As of May of this year, KBR had earned some $24 billion since the war began.

KBR has been notable for other reasons, of course -- like accusations of political favoritism, (It was formerly a subsidiary of Halliburton, once headed by Vice President Dick Cheney.), overcharging and negligently endangering troops. The only other contractor to garner as much negative publicity has been Blackwater, due primarily to last year’s shooting of Iraqi civilians in Nisour Square. The report calculates that between $6 billion and $10 billion has been spent in Iraq on private security contractors like Blackwater.

But the contracting bonanza in Iraq has spread far and wide, and the questions raised by the report go beyond waste and abuse (which we've been diligently tracking in Scandal Watch). As James Risen writes in today's New York Times, it becomes a question of what the ramifications are of privatizing what used to be fundamentally governmental activities:

Peter W. Singer, a defense contracting expert at the Brookings Institution, said the biggest problem was that the administration contracted out so much work in Iraq, almost no thought had been given to an overall strategy to determine which jobs and functions should be handled by the government, and which could be turned over to private companies without damaging the military effort.

"These new numbers point to the overall question — when do you cross the line in terms of turning over too much of the public mission of defense to private firms," Mr. Singer said. "There are some things that are appropriate for private companies to do, but others things that are not. But we don't seem to have had a strategy for determining which was appropriate and which wasn't. We have just handed over functions to contractors in a very haphazard way."