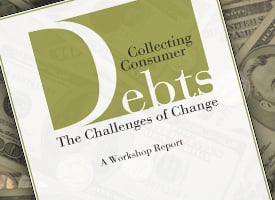 Last month, the Federal Trade Commission issued a report advocating an overhaul of the Fair Debt Collection Practices Act (PDF), a federal law that protects consumers from abusive collectors. The report's recommendations were welcome news to consumer advocates and ACA International, the trade association for the debt collection industry, which fought a recent amendment that let local prosecutors cash in from a company whose collection tactics have come under fire.

A ProPublica investigation earlier this month showed how the primary beneficiary of the exemption, American Corrective Counseling Services, makes money by partnering with local district attorneys.

Acting under authority of the DAs, the company sends out letters on official DA letterhead that threaten prosecution and jail time if consumers do not make good on bounced checks -- even when there is virtually no chance consumers will be charged with a crime. ACCS assesses fees of several hundred dollars and kicks a portion back to DAs. Los Angeles County -- one of 150 counties in which ACCS operates -- cleared more than $1 million over four years, documents show.

Critics claim the tactics are deceptive, an accusation the company and prosecutors deny. After federal class-action lawsuits targeting the company were filed in several states, lobbyists for ACCS and district attorneys persuaded Rep. Barney Frank (D-MA) to provide critical support for an FDCPA amendment (PDF) that exempted the ACCS program from provisions defining abusive practices. That amendment passed in 2006 without a public hearing.

The February FTC report (PDF) does not address the exemption. Instead, it concludes that "the debt collection legal system needs to be reformed and modernized to reflect changes in consumer debt, the debt collection industry, and technology." The act is more than thirty years old.

Deepak Gupta, director of the Consumer Justice Project at the consumer advocacy group Public Citizen, which is a party to the class-action litigation against ACCS, said odds that Congress will tackle a rewrite of the law are unclear. "I don't know whether it's a real possibility," Gupta said. "The fact the FTC has recommended that the Fair Debt Collection Practices Act be modernized is really helpful in those efforts."

ACA International opposed the amendment from the beginning. The group considers ACCS's practices abusive and believes that partnering with prosecutors gives the company an unfair competitive advantage.

"We are in the process of working on an FDCPA reform package that would eliminate the amendment that allows these bad check companies to skirt the law," said Rozanne Andersen, general counsel of ACA International. Andersen said the group is trying to win over Sen. Chris Dodd (D-CT), chairman of the Senate Banking Committee.

Frank, now the chairman of the House Financial Services Committee, said in a recent interview that ACCS's practices deserve to be looked at, but his office has not answered questions about whether or when the congressman will follow through.

The company's attorney has said its program is within the law and that all its collection actions are taken under authority of local district attorneys.