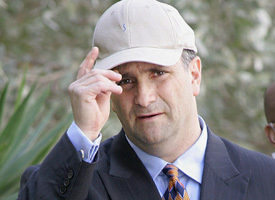 A federal judge sentenced Jack Abramoff to four years in prison today for corrupting lawmakers and their staff, swindling Indian tribes and cheating on his taxes.

Abramoff has been serving time since November 2006 for defrauding investors in a casino boat venture, but today's sentence would not count that time, meaning that Abramoff could serve until 2012. That's more than even prosecutors asked for.

While a top lobbyist in the 90s and early 00s, Abramoff ran an elaborate favor system for Republican lawmakers and officials involving free meals at his restaurant, sports and event tickets, hundred-thousand-dollar junkets and sometimes cash. He pleaded guilty to a public corruption scheme, along with defrauding his tribal clients and tax evasion.

Before sentencing, Abramoff wrote the judge to tell her "I am not a bad man (although to read all the news articles one would think I was Osama Bin Laden), but I did many bad things." In the e-mail (PDF), Abramoff argued that his substantial assistance to investigators proved he'd turned a corner. He'd been "cooperating every moment I could even in jail when that has been far from a comfortable thing to do in this circumstance and in that population," he wrote.

His lawyers made the same argument for a lenient sentence, calling Abramoff "near the top of all Government cooperators." Prosecutors agreed that Abramoff had been a big help in prosecuting 12 others, 10 of whom were public officials (PDF), and suggested a sentence of five years, four months including the time he's already served for the other case. The criminal statutes called for a minimum of nine years.

Just because Abramoff has been sentenced doesn't mean he's done cooperating, however. Prosecutors were clear that there are ongoing investigations. They didn't name the subjects, but Rep. John Doolittle (R-CA) and Ex-Rep. Tom DeLay (R-TX) have long been under scrutiny as part of the investigation. Both have denied wrongdoing.