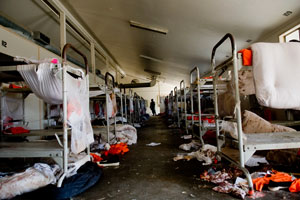 Among the many lesser-known provisions tucked into the lengthy health care reform bill passed last month is one that expands the U.S. attorney general's power to look into the abuse and neglect of those living in institutional settings.

Most local and state officials cooperate with CRIPA probes, resolving disputes through settlement agreements. Occasionally, however, they refuse to participate in the process, forcing the federal government to take them to court.

We wrote about one such case in Buffalo, N.Y., where Erie County Sheriff Timothy Howard balked at Justice Department requests for unfettered access to the Erie County Holding Center. The Justice Department opened an investigation into conditions at the 680-bed jail in November 2007 in response to reports of excessive force by guards and a rash of inmate suicides. When Erie County officials would not make improvements voluntarily, the Justice Department filed suit. Its inspectors gained access to the jail last month under a court order, prompted, at least in part, by three additional inmate suicides that have occurred since oral arguments began in the case.

The CRIPA language was originally a part of the Health Care Fraud Enforcement Act, which Sen. Ted Kaufman, D-Del., introduced last October. That bill never made it out of the Senate Judiciary Committee. Last November, Kaufman introduced an amendment to the Senate version of the health care reform bill that included many of his original provisions. The CRIPA language remained in the bill that President Barack Obama signed.

"The absence of subpoena authority enables non-cooperating jurisdictions to obstruct and delay the [Civil Rights] Division in its mission to ensure that the federal rights of persons in the custody of state and local officials are respected," a spokesperson for Kaufman wrote in an e-mail. "The resultant litigation when jurisdictions exploit the absence of subpoena power is extraordinarily costly, yet the substantive outcome ... is the same."