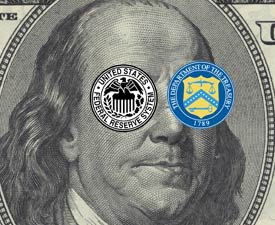 Putting a dollar amount on the financial rescue isn’t an easy task, as we’ve noted before. Those looking for an answer can find estimates from a few trillion to as high as $24 trillion. That’s mainly due to different judgment calls on what should count. So here again, by popular demand, is a look at some of the ranging estimates.

Our bailout database tracks only taxpayer money appropriated by Congress. As we detailed yesterday, about $390 billion of the TARP and the bailout of Fannie Mae and Freddie Mac remains outstanding.

The estimates below also take into account activity by other federal entities. The quasi-governmental Federal Reserve has the biggest tally, but the Federal Deposit Insurance Corporation and other government programs also boost the totals. The three estimates come from a financial services company, Bloomberg News and the special inspector general for the TARP.

The equity research division of Keefe, Bruyette & Woods came up with two totals in a September report on the scope of the government intervention. The Fed, the FDIC and the Departments of Treasury and Housing and Urban Development have collectively allocated $10 trillion, and of that total, they’ve accessed $2.9 trillion, according to KBW. (In the spring, that number was $3.2 trillion, a difference mainly due to a slight reduction in the Fed’s balance sheet and the return of bailout funds by some of the big banks.) Here’s how that $2.9 trillion breaks down:

This doesn’t mean that $2.9 trillion has actually been spent – mixed in here are government guarantees of assets, which is why KBW uses the fuzzier term "accessed." The $10 trillion "allocated" number is even fuzzier. That’s how much the government could access if it maxed out on all its programs.

Bloomberg News came to a similar total last week, though its methodology is more inclusive – it adds things like the stimulus bills passed by the Bush and Obama administrations and the Cash for Clunkers program. Its calculations also differ from KBW’s in how certain programs should be counted. So while it seems like the two estimates agree, their methodologies don’t.

Bloomberg’s max allocated number is $11.6 trillion, with $3 trillion accessed. Its estimate, too, has dropped since the spring: Back then, it was $4.2 trillion. Here’s Bloomberg’s breakdown of the $3 trillion:

And, finally, there’s the special inspector for the TARP, Neil Barofsky, whose report in July (PDF) made some waves with the highest figure of all: $23.7 trillion. But as the report itself made clear, that was an estimate with a big asterisk.

The $23.7 trillion was a total of all the government’s potential liabilities assumed as a result of actions taken to stabilize the financial sector since 2007. Thus, it was something of an intellectual exercise, not a realistic attempt to assess how many government dollars had been put at risk. It even included a number of programs that had been canceled.

The report had another estimate that matches up more closely with KBW’s and Bloomberg’s. The "current balance" of bank rescue efforts as of June 30, it said, was about $3 trillion. Here’s that breakdown (totals are rounded to the hundred billion):